Is the fitness program more than an exercise in alliteration?

The recent EU plan for meeting its target of a 55% net emission reduction of greenhouse gas (GHG) emissions by 2030 is titled “Fit for 55.”  The plan is part of the EU Green Deal and includes a wide range of policies and plans, totaling thousands of pages.

While the alliteration — “fit” for “fifty-five” — is clever, and we think cleverness in writing is helpful, it does raise a question as to whether the plan is an exercise in public relations or a meaningful step toward the GHG emission reduction target.

A preliminary assessment of the EU fitness program by the European Environmental Bureau is entitled “Why EU’s ‘Fit for 55’ is unfit and unfair.”  See EEB report in Commentary section of this issue of irish environment magazine.  The title certainly sets the tone for EEB’s assessment and the EEB rightfully points out the weaknesses of the plan.  A Podcast by the German media company DW on the “Fit for 55” is also available in this issue, and presents varying views of the fitness program. 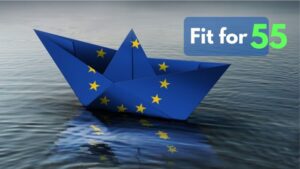 We note some key contributions made by the fitness program at this time.  It cannot be lost that the Fit for 55 plan comes as everybody is gearing up for the 26th UN Conference of the Parties (COP), scheduled for Glasgow in late November.  In Fit for 55, the EU has laid down a marker for other political bodies and countries with specific and wide-ranging plans for advancing the global discourse on achieving net emissions by 2050.  The plans are, at times, ambitious and, at other times, timid.  And the fitness plan has to survive rounds of legislative and executive action in the EU structure before it can be implemented.

At the same time, the EU is viewed, rightfully, as one of the more progressive voices on global warming talks, and the fitness plan can serve to raise the threshold for others in the COP talks. Certainly the UK as host of the COP talks and as newly emerging from the EU should feel some pressure to engage in a meaningful discourse at the COP.  But Boris Johnson can be as unpredictable, and as evasive, as Trump so we shall see.

Another example of how the fitness plan can be useful is inclusion of an EU carbon border adjustment mechanism (“carbon border tax”).  The border tax is designed to counter carbon leakage which occurs when industries in country “A” are subject to a carbon price on their goods and they lose business to goods imported from Country “B” where the carbon price is lower or non-existent.  For example, any such carbon tax within the EU would have significant implications for iron, steel and aluminum coming into the EU from Russia and Turkey.  It has been estimated that Russia exported about €8 billion worth of covered goods in 2019.

The proposed carbon border tax is scheduled to come into effect in 2023, with a 3-year transition which would be subject only to reporting requirements, and the payments under the tax would be phased in over another 10 years.  Initially only 5 sectors would be affected:  iron and steel; aluminium; cement; fertilisers; and, electricity.

What we note here about the border tax merely scratches the surface.  The details required to implement a carbon border tax are complicated, extensive and far from settled.

It is the very complexity of the carbon tax plan that underlines its importance.  It is clearly not a pie-in-the-sky notion; it is not vague.  Rather the seriousness of the plan can serve as a model for others.  With the EU Fit for 55 on the table, already the American, Canadian and even the British are exploring the notion and what they might need to put forward in response.

The idea of a carbon border tax has been bouncing around climate talks for some time.  It is a specific application of a carbon tax, with geopolitical ramifications by using trade policies to advance climate action.

At least the EU commitment to such a plan takes the idea to a new level and hopefully the 26th COP will buzz with such talk.

‘Fit for 55’: delivering the EU’s 2030 Climate Target on the way to climate neutrality, COMMUNICATION FROM THE COMMISSION TO THE EUROPEAN PARLIAMENT, THE COUNCIL, THE EUROPEAN ECONOMIC AND SOCIAL COMMITTEE AND THE COMMITTEE OF THE REGIONS (14 July 2021).  bit.ly/3f9lHLg