Andrew Phillips and Charles Seaford, “The Climate Consensus. The Public’s Views on How to Cut Emissions: Results from the Climate Calculator,” DEMOS

The UK’s 2030 climate target is within reach.

At a decisive point for climate action, this report marks a major intervention in the climate policy debate, presenting a viable path to meeting our 2030 target chosen by the UK public.

Made possible by innovative new technology, we report on a package of policies that represent the commitments and trade-offs we as a country are prepared to make, based on the input from a nationally representative group of nearly 20,000 people. We believe the Climate Calculator can be a vital part of stimulating a national conversation about how best the UK should address climate change. 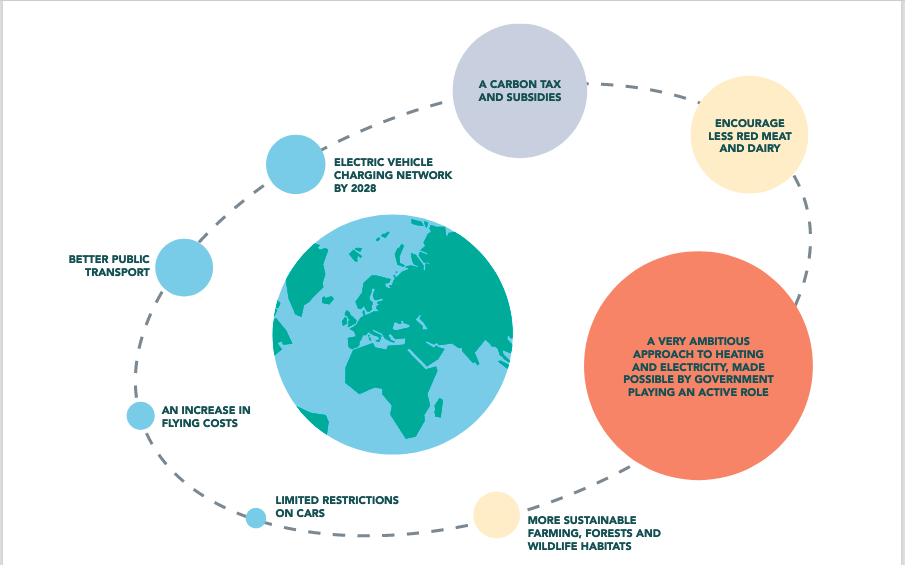 A carbon tax and subsidies for industry
Manufacturing and construction businesses pay a tax of £75 per tonne of CO2 equivalent emitted.  Those industries that find it difficult to decarbonise but put in place greener processes also receive a subsidy for CO2 equivalent that they do not emit as a result. Manufacturers pass on their extra costs to consumers, so prices of some products increase. However, the proceeds of the tax are redistributed to households.

Better public transport
We continue with current levels of investment in improving buses and cycling (about £1bn a year), but also move to a system in which local government coordinates routes, improves services and sets fares. This will take some additional investment but will not be much more expensive than the current system in the long run.

Encourage less red meat and dairy
A strong campaign run by supermarkets, food companies and government makes plant-based foods and meat alternatives easier and more attractive to choose and cook, and increases awareness of the health and climate benefits of a change in diet. This reduces red meat and dairy consumption per person by 10%.

An increase in flying costs
A frequent flier levy is introduced which would involve no tax on the first return flight and at least 10% on the second, 20% on the third, 30% on the fourth and so on.

More sustainable farming, forests and wildlife habitats
Some land is used for tree planting and to restore areas of peatland. Remaining agricultural land is also used to support less intensive, more sustainable and organic forms of farming. This reduces degradation of soil and protects biodiversity of insects, birds and other wildlife through reduced use of chemical fertilisers and pesticides and through paying farmers to create woodland, wildflower meadows and hedgerows.

A very ambitious approach to heating and electricity, made possible by government playing an active role
The government increases its 2030 target to 1.4m existing homes to have heat pumps installed each year, with 770,000 to be insulated. It takes an active role to ensure sufficient supply of heat pumps and insulation to households, that these create UK jobs, and that costs are minimised. It provides a grant to cover some of the additional costs and it introduces a government-backed loan scheme at low interest rates to cover the rest, with homeowners paying these back from their energy bill savings. Low-income households receive grants to cover the total cost. The government also sets more ambitious targets for wind and solar electricity generation.

The Climate Calculator was built to create a step change in public engagement around climate policy, creating a new opportunity for people in the UK to determine a route to our 2030 climate target. The first of its kind, it allowed the public to weigh up the impact of individual policies on emissions as well as on household costs, jobs and health, enabling them to create a combination of measures to reach the target. It is still live, and we encourage readers who have not already used it to try it out (www.climatecalculator.co.uk).

Participants explored six policy areas: electric cars, public transport and cycling, heating, flights, food and land use, and other things we buy (covering manufacturing and construction). In each, people were presented with a series of policy options, from those maintaining the government’s current approach to those requiring significant government intervention. This gave people the power to concentrate changes in a few sectors or to make smaller changes across more areas, but either way it required them to reach the UK government’s 2030 climate target of a 39% emissions reduction from a 2019 baseline.1  The package that emerged is therefore more than just a list of popular policies: it is a measured set of choices, compromises and investments the public are prepared to make to tackle climate change.

These measures, if taken together and taken soon, would result in a 42% reduction in emissions by 2030, exceeding the government’s existing target and setting the country on a clear path to net zero.

The most popular policies chosen by the public require government to take an active approach, leading a well-planned and orderly transition.  Crucially, they are supported by public willingness to shoulder the required costs, provided those on lower incomes are protected. The policies in the package attracted between 77% and 94% support. All regions, income bands, supporters of different political parties and age groups converged on the same list and there was only limited variation in the levels of support for different policies from different demographic groups.

Further detailed policy development is needed of course, but this should be done with the public, using tools similar to the Climate Calculator. This has already shown how effective this form of engagement can be.

The full report of Climate Consensus. The Public’s Views On How To Cut Emissions: Results From the Climate Calculator was originally published by Demos at demos.co.uk/wp-content/uploads/2021/10/Climate-Consensus-Report.pdf

Andrew Phillips is a Research Trainee at Demos, working on a range of topics including climate change and public services. His interests include citizen engagement, democratic innovation and long-term policymaking in government.

Prior to joining Demos, Andrew was a Research Assistant in the public services team at the Institute for Government. While at the Institute he worked on a project analysing devolved public services, focusing on comparative health care policy and performance in England, Scotland, Wales and Northern Ireland. He has also worked as a researcher at a think tank in Cambridge, and as a tutor in ancient languages.

Andrew holds a BA in Classics from the University of Oxford.

Charles Seaford leads the Power and Institutions programme at Demos.

In addition to his work at Demos he is a Co-Investigator at the Centre for the Understanding of Sustainable Prosperity, an ESRC funded research consortium and a Director of Represent Us, a campaigning group. His book ‘Why Capitalist need Communists: the politics of flourishing’ will be published by Palgrave in March. He was formerly Head of the Centre for Wellbeing at the New Economics Foundation, where he led projects on wellbeing, housing, industrial policy and indicators, an advisor at the UK government Sustainable Development Commission and an organisational change consultant. He co-founded Prospect magazine and has an MBA from London Business School and a BA from Oxford. 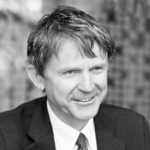