The term, also known as “rivers in the sky,” sounds like an oxymoron since a river is water that moves over land, not through the sky.  But it makes sense as columns of vapor that are carried by wind and weather in the sky and eventually release their vapor as water or snow when they are carried over landfall.  They are long and narrow columns, typically about 2,000km (1,245 miles) long, less than1,000 km (620 miles) wide, and about 3km (1.8 miles) in depth. 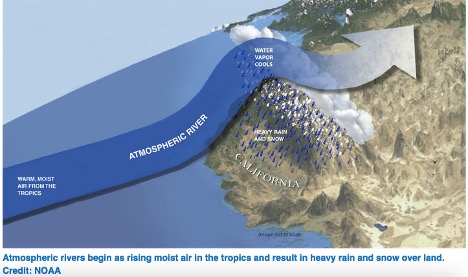 Usually, they pick up vapor from warm, moist air in tropical regions and flow in the direction of moving air.  When they move over land,  they drop the vapor in cooler regions as rain or snow, sometimes in significant amounts of precipitation in a short time.  An example is known as the “Pineapple Express” which forms near Hawaii and hits land in the Western US and Canada, with up to 5 inches of rain in a day.

The identification and movement of these atmospheric rivers is important.  The water from the rivers can provide up to half of the annual fresh water precipitation on the US West Coast, a critical resource. They also can contribute to snowpack, critical to annual water supplies.  But when they stall over an area of land they can also dump significant amounts in a short time, which leads to floods, mudslides and storm events.

Some further ideas to explore on Atmospheric Rivers:

How far inland do the atmospheric rivers have any significant impact?

Where are the nearest atmospheric rivers that affect your area?  Do they have significant impact on your weather?

National Oceanic and Atmospheric Administration, What are atmospheric rivers? bit.ly/31cWSKQ