Generally speaking, the term refers to oil and gas projects that, if allowed to proceed, will kill the chances to reach agreed temperature limits and will produce catastrophic adverse global impacts.  Such projects are those that would result in at least a billion tonnes of CO2 emissions over their lifetimes, in total equivalent to about 18 years of current global CO2 emissions. 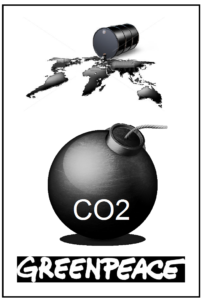 About 60% of these projects have already started pumping.  Included in such projects are new drilling wells in the Canadian wilderness and the huge North Filed gaswells in Qatar, the biggest carbon bomb in the world.  The US is the leading source of potential emissions, with 22 carbon bombs with the potential to emit 140bn tonnes of CO2, almost four times more than the entire world emits each year.  Meanwhile, government subsidies for these fossil fuel companies continue to flow.

Rather than keeping fossil fuels in the ground, these projects will drive the fuel to the surface and blow the lid off any cap on carbon emissions.  It is critical that these bombs be diffused.

Some further ideas to explore on Carbon Bombs:

Where is the carbon bomb nearest to where you live?

Have there been any protests against the project.  If not, why not?

How many carbon bombs are there that are being financed by companies headquartered in the EU?

Are there any lawsuits that have been filed to stop these bombs?  If not, are there any legal claims that could be filed to protest them?