The term, abbreviated as ”XR”, refers to a grassroots-based, activist organization dedicated to non-violent, direct and disruptive action, including civil disobedience, in opposition to climate breakdown.  It focuses on climate change, biodiversity loss, crop failure, social and ecological collapse, and mass extinction of species.  Founded in the UK in October 2018, it became a global organisation in a brief time with hundreds of branches in dozens of countries.

The use of “extinction” indicates concern for the more extreme consequences and risks associated with climate breakdown, and the use of “rebellion” indicates the form of behavior thought necessary to address these risks.  The organization is sometimes perceived as a youth organisation, however, people of all ages take part in its activities. 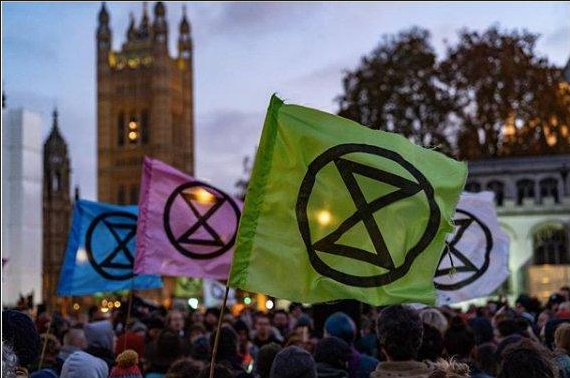 Those activities include public protests, often involving civil disobedience, as well as a variety of campaigns.  The former is represented by the April 2019 street protests in London that shut down city streets over 11 days and resulted in 1,100 arrests.  Shutting down streets and chaining people to gates are common tactics.  The latter is represented by a recent campaign for financial disobedience where people are encouraged to redirect loans from banks that finance fossil fuel projects to those that support climate justice, and encouraging small businesses to take some taxes and use them to help fund green, sustainable initiatives instead of paying the government.

XR’s underlying demands to the government are: to tell the truth about the climate and ecological emergency; to halt biodiversity loss and commit to net zero emissions by 2025; and to follow the lead of a citizen’s assembly.

What are the similarities and differences between Extinction Rebellion and Greenpeace?

What about the similarities and differences between the tactics of Extinction Rebellion and the Occupy movement?

Identify the Citizens Assemblies across the globe that have addressed climate change — start with Ireland’s Citizens’ Assembly — and determine what accounts for whatever success they have had.