The term is a combination, or portmanteau, of the terms “producer” and “consumer.”  It refers to people, enterprises, organisations or institutions that both consume goods or services and who also participate in the production of those goods or services.  The term can apply to a wide variety of fields and the energy sector provides a good example.  A consumer of energy is one who pays for energy produced by someone else, e.g., an electric company.  Prosumers actively participate in the energy system.  For example, a prosumer may install rooftop solar panels tied to the grid, and then both pay for use of the grid and sell excess energy to the grid for use by others 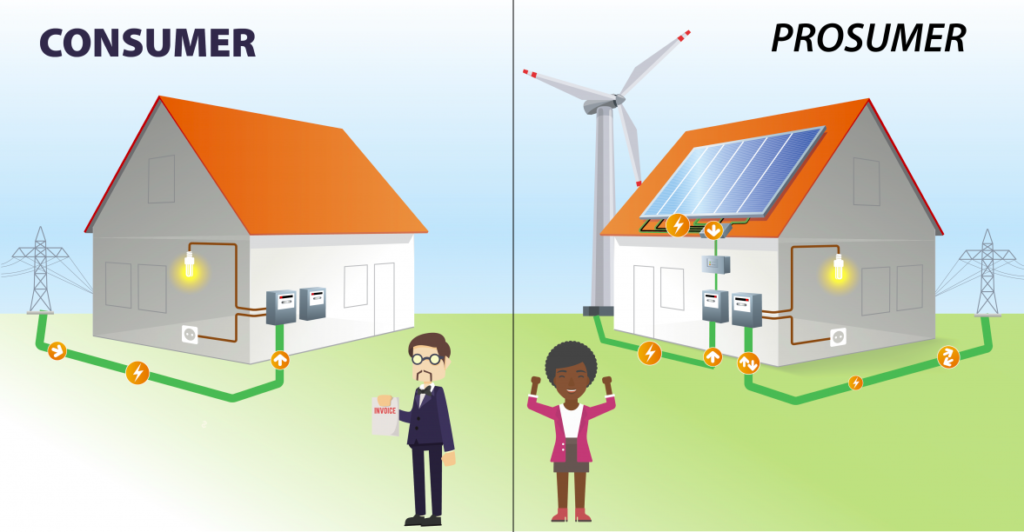 Prosumers of renewable energy can make a critical contribution to decarbonising their communities.  In effect, the people can form their own district heating network.

Technological developments allow for more user participation in consumption activities in all sorts of areas.  For example, social media serves as an opportunity for people to consume posts in a social media and to produce posts for that same media.

Prosumers can act as individuals, e.g., the use of posts on social media, or as part of a collective, e.g., a community-owned wind farm where people consume the energy from the wind farm and participate in producing it.

Some further ideas to explore on Prosumer:

Identify an instance where you are acting as a prosumer.

Are there more opportunities to be a prosumer in an urban area than a rural area?

Energy Democracy: The Rise of Prosumers, What Is A Prosumer? energy-democracy.org/what-is-a-prosumer/