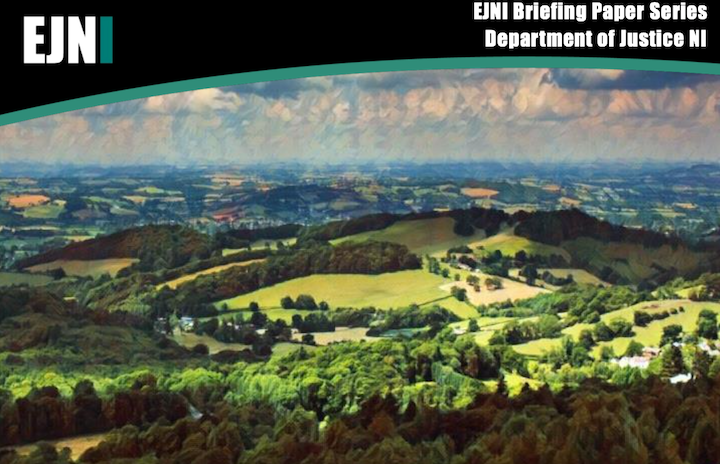 1.1 Problematic handling of environmental and planning cases as they pass through the legal system (both civil and criminal) must be improved.

There has been a long history of dissatisfaction with the process and outcomes of both environmental criminal prosecutions and environmental/planning judicial reviews. Some of the central issues relate to sentencing in environmental prosecutions. Although substantial penalties have been provided for within environmental legislation, in general sentences imposed by the courts fall far below the maximum penalties, below any threshold that could create a deterrent to further commission of environmental crime and far below the levels of penalties imposed in other parts of the UK. There are also significant problems with judicial review e.g. relating to prohibitive costs (see 1.2), and the very nature of judicial review itself enables only a very limited form of challenge (i.e. of decision-making processes rather than substantive merits-based scrutiny) which is of limited utility in an environmental context. In the context of the planning system, the absence of equal rights of appeal and the quality of evidence presented to the Courts have been raised by personal litigants as persistent barriers to environmental justice. EJNI has access to numerous case studies which demonstrate how these barriers operate in practice.

EJNI recommends that the Department of Justice undertake a wide-ranging review to examine how effectively the NI Justice system is delivering proportionate, effective, transparent and targeted environmental justice. This review (bolstered by a public consultation) should consider whether a specialist environmental & planning court/tribunal (following the example of e.g. the commercial court/business hub); support for enhanced sentencing guidelines; specialist magistrates and PPS prosecutors and/or alternative avenues/mechanisms of appeal for environmental and planning cases would enhance the current system.

1.2 Compliance with the UNECE Aarhus Convention 1998 must be ensured.

Our research is uncovering persistent concerns surrounding barriers to environmental justice in NI, some of which threaten to undermine the UK’s compliance with its obligations under the Aarhus Convention. This is particularly significant given the removal of EU scrutiny and accountability mechanisms post-Brexit. One recurring theme (of several) raised by stakeholders from a range of professional backgrounds (including personal litigants) has been the issue of prohibitive costs in environmental cases. We welcome the cost-capping arrangements brought in by former Justice Minister David Ford MLA to improve implementation of the Aarhus Convention and restrict costs from arising adversely. However, we have concerns that in Northern Ireland the costs sustained by an individual from their own legal representation (due to the current absence of conditional fee arrangements for these cases) in combination with the (albeit restricted) adverse costs are prohibitively expensive within the meaning of the Aarhus Convention. There are potential avenues to resolving this issue which EJNI is currently exploring.

EJNI recommends that the Minister for Justice establishes a dedicated Aarhus Compliance unit within the DOJ to review compliance with the Aarhus Convention and explore ways in which Aarhus rights in NI can be supported. This unit should work closely with any equivalent structures in the ROI and UK. It should also support and work in collaboration with emerging civil society initiatives (e.g. Aarhus centres) and academic research into Aarhus implementation.

“The Northern Ireland experience of the Aarhus Convention has been marked by a stark contrast between the evident desire of the courts to secure compliance, and at best an indifference on the part of the dominant parties in the Executive towards the Convention.”  [William Orbinson QC, 2015]

2.1 Establishment of an independent Environmental Protection Agency is a long overdue priority.

Although the presence of an IEPA is not necessarily a prerequisite for effective environmental protection, many of the regulatory failures that have occurred over the past 30 years have been attributed to this feature of Northern Ireland’s environmental governance arrangements. Particularly problematic issues have been the creation of ‘poacher–gamekeeper’ scenarios within environmental regulation, allegations of political interference in regulatory decision-making and inconsistent environmental policy-making dependant on the political allegiance of successive environment ministers. The recent reorganisation of government departments has also arguably enhanced the risk of agency-capture by increasing the proximity between the regulator and the regulated community within the new Department of Agriculture, Environment and Rural Affairs (DAERA).

EJNI would urge all Executive Ministers to push forward on the delivery of this commitment. The UK’s post-Brexit environmental governance plans (e.g. extension of the proposed Office of Environmental Protection) do not remove the need for an environmental regulator which operates outside of central government in NI and which is free to undertake regulation without serious conflicts of interest. EJNI would also request that the NI Executive and Office of First and Deputy First Ministers reconsider the current structural arrangements which place responsibility for supporting agriculture and regulating the environment under the same Ministerial portfolio. These two core governance functions should be separated to avoid obvious conflicts of interest.

2.2 Climate change legislation for NI is urgent and should be fast-tracked into the legislative agenda.

NI lacks any form of devolved climate legislation despite this being designated as a priority in the New Decade New Approach Agreement & Stormont’s declaration of a climate emergency. The ROI Supreme Court’s recent judgment in Climate Case Ireland sends a clear signal that governments can be held accountable for their climate obligations & this should be noted by the NI Executive.

2.3 Good Friday/Belfast Agreement commitments to all-island cooperation on environmental protection must be delivered.

The transboundary nature of many environmental problems coupled with the inherent need to cooperate with neighbouring jurisdictions to ensure environmental protection is explicitly reflected in the provision for cross-border environmental governance enshrined in the Good Friday/Belfast Agreement. While there have been strong arguments for enhancing cross-border environmental governance given the significant and very similar problems faced on either side of the border and the cross-border nature of issues like waste crime and transboundary pollution for decades, this has recently become problematised by the Brexit process which also clearly places the existing limited cross-border measures in jeopardy. Recent research (Hough, 2019) has highlighted extensive avenues for closer cross-border cooperation on the environment using the GFA structures and the need has also been reflected in the ROI’s most recent Programme for Government.

EJNI recommends that the NI Executive consider an equivalent commitment to cross-border cooperation on the environment and as a first step establish a cross-border consultative forum to explore how this could be delivered. This forum should involve participatory and innovative forms of deliberation with local and global stakeholders. The NI DOJ should review how an Aarhus Implementation Unit and the Department more generally could connect with counterparts in the ROI in an enhanced way to ensure the Aarhus Rights landscape and cooperation on criminal/civil justice (e.g. on information sharing) are considered in an effective and practical all-island context.

2.4 The public inquiry into illegal waste disposal in NI voted for (unanimously) by the Assembly in March 2014 should be commenced as a priority.

Illegal disposal of waste in NI and across the island of Ireland is a category of damaging environmental crime which is highly profitable, often linked to other criminal activities, expensive to remedy and which remains pervasive. NI is host to one of the biggest illegal dumps in Europe at Mobuoy, the handling of which continues to undermine public trust in both environmental regulation and the justice system.

“A well-managed environment should be seen as a vital asset for the shared future of the people of Northern Ireland and a greater focus on protecting this common (not tribal) interest would enhance confidence in power-sharing and demonstrate stability.”  [Brennan, Purdy & Hjerp, 2017]

EJNI’s research to date has indicated that there is a clear need to enhance the level of expert input on environmental matters into policy making processes and legal reforms. There are significant gaps in knowledge relating to almost all of the issues raised in this briefing paper and many of these issues are also currently of major political significance. Government support for research which produces evidence upon which policy priorities and legal reforms can be based is crucially important. Equally important is to create research processes where decision-makers work in collaboration with a broad range of stakeholders to address knowledge gaps. In doing so, underappreciated and undervalued perspectives can be integrated into policy-making processes and public participation in decision-making can be enhanced. EJNI is designing research agendas that will deliver useful, practical outputs driven by research user (including government departments’) needs. The work is particularly timely given the ongoing debates about the future relationship between the UK & Ireland post-Brexit (specifically those which coalesce around environmental governance and the border in Ireland) & increasing demands for governments to take radical action relating to the climate crisis & environmental degradation. All of these issues will require research communities to undertake agile, evidence-based research in rapid response to urgent environmental, political & social needs. By confronting politically contentious issues, promoting co-production of research outputs between non-academic stakeholders with often competing agendas & building connections between researchers with distinct research backgrounds, the research projects we are currently engaged in have the potential to radically transform the EJ research landscape on the island of Ireland at a time when meaningful collaboration is vitally important.

“…in its curtailed role of largely examining the procedural legality of a challenge, the judicial system is always in danger of perpetuating poor decision-making, effectively compounding failures of environmental governance.”  [Statement to Aarhus Compliance Committee, River Faughan Anglers, 2017]

Alison Hough, “The potential of the Good Friday Agreement post-Brexit environmental governance on the island of Ireland (2019),” Irish Planning and Env. Law (2) 55-65.

Ciara Brennan, James Orr, Peter Doran, Alison Hough, Dean Blackwood and Laura Neal, ‘Delivering environmental justice in NI and on the island of Ireland: A briefing for the Department of Justice NI’ (2020) EJNI Briefing Paper Series, No. 01.  The original briefing paper EJNI Briefing Paper Series, No. 01, and other briefings by EJNI are available at ejni.net/resources/research-briefings/.

The Environmental Justice Network Ireland was established in June 2019. EJNI is an all-island network which seeks to build collaboration between groups and individuals involved in the delivery or pursuit of env justice. Its goal is to connect academics, lawyers, NGOs, decisionmakers and community activists and in doing so help equip people with the knowledge and tools they need to enhance the quality of environmental justice on the island of Ireland.

Previous articleMarie Toussaint, “Environmental racism and the quest for justice” Next articleFrank Convery and Thomas Sterner, “Framing the Challenge Towards a Deep Climate Collaboration (China, European Union, India, US) – DCC4”