EEB/META, World’s First Special Rapporteur on environmental defenders now at the other end of the line

The EEB and the Aarhus NGO community welcome the election of the world’s first Special Rapporteur on environmental defenders, and expect him to stand tall against the oppression of any person who comes under attack for exercising their rights under the Aarhus Convention, write Margarida Martins and Ruby Silk.

Last week, at the third extraordinary session of the Meeting of the Parties (ExMoP3) to the Aarhus Convention in Geneva, Michel Forst became the world’s first Special Rapporteur on environmental defenders. Mr. Forst, who was nominated for the role by the EEB and ClientEarth, Earthjustice, Justice and Environment and Guta Environmental Law Association, was elected by consensus. His role is operational with immediate effect.

It is no secret that environmental defenders are constantly and increasingly under attack across the globe. They face intimidation, harassment, stigmatisation and criminalisation, assaults and even murder. Global Witness has recorded that 1,539 environmental defenders were killed between 2012 and 2020 worldwide, and the real figure is likely much higher, given that many murders go unreported.

Environmental defenders, be they lawyers, journalists or community activists, play a fundamental role in protecting land, forests, water and other natural resources by raising awareness about and campaigning against destructive practices and exposing environmental crimes.

Aarhus Convention and the RRM

The protection of environmental defenders is called for in the UNECE Convention on Access to Information, Public Participation in Decision-making and Access to Justice in Environmental Matters (Aarhus Convention), in article 3(8), which obliges states to protect those who exercise their environmental rights from harassment, penalisation and persecution.

In previous years, the Aarhus Convention’s compliance mechanism has been employed when these obligations are ignored. However, the compliance mechanism is designed to analyse each case meticulously, taking into account arguments from all sides of the dispute, and for this reason it can move very slowly. Parties to the Convention found that to improve the protection of environmental defenders facing imminent threats a quicker response was needed.

As a solution, a so-called rapid response mechanism (RRM) was adopted by the Meeting of the Parties at its seventh session in Geneva, on 21 October 2021, which provides for additional sped-up protection measures. The RRM is a procedure which kicks in when someone is penalised, persecuted or harassed by the authorities or by private companies for making use of their rights under the Aarhus Convention to protect the environment.

For example, the RRM could be triggered if a person trying to get access to information to show that an industry is polluting a river or to participate in a decision-making process to stop  the construction of a dangerous dam, faces a hostile retaliatory action from a private company or a public authority trying to protect the company’s interests. This retaliation can take many forms, from surveillance, heavy fines and dismissal from employment, to threats and intimidation, criminalisation, detention, violence and murder.

The RRM is the first such mechanism specifically safeguarding environmental defenders to be established within a legally binding framework.

The rapid response mechanism established a Special Rapporteur with the authority to approach public authorities in all Aarhus Parties directly and issue immediate protection measures to prevent the harassment and persecution of environmental defenders. Last week, Michel Forst was elected as this Special Rapporteur by consensus of all Parties.

The Special Rapporteur will have access to a toolbox for resolving complaints and protecting environmental defenders quickly and effectively that will most likely include: issuing protection measures, using diplomatic channels, issuing public statements, or bringing the matter to the attention of other relevant human rights bodies and the concerned Governments and Heads of State. Additionally, the Rapporteur will take a proactive role in raising awareness of environmental defenders’ rights under the Aarhus Convention and cooperate with other relevant human rights bodies and organisations to secure these rights.

Preceding the election, Jeremy Wates, Secretary General of the EEB, expressed the EEB’s hopes for the Special Rapporteur:

The qualities we really want to see in a special rapporteur are  firmness, fairness, legal acumen, advocacy skills and independence of thought.

We are sure Special Rapporteur Michel Forst is equipped with all of these qualities and many more. 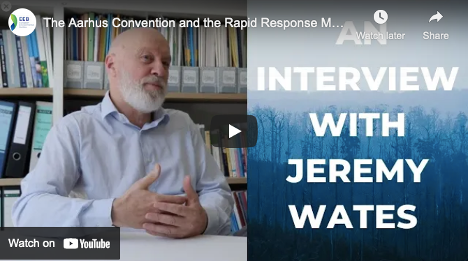 Following the election, Mr. Forst expressed his commitment to working with the NGO community to protecting environmental defenders, and we are looking forward to this collaboration.