On a crisp Monday morning in the port of Rotterdam, the Ecodelta, a dredger boat, gets to work scraping the seabed, clearing the way for the gigantic cargo ships that pass through one of the world’s busiest ports.

The Ecodelta is part of a new trend for supposedly clean gas-powered ships. The names contain words like ‘eco’ and they are often painted green. But their green credentials end there.

Shipping is a huge source of carbon emissions and the switch to clean fuels is slow. Traditional marine (bunker) oil is the dirtiest fuel there is and shipping is responsible for roughly the same amount of global emissions as flying.

The shipping industry alongside oil and gas companies, and many European politicians are pushing for liquified natural gas (LNG) as a ‘clean’ alternative to traditional fuels.

On paper, LNG-powered ships emit less. There is no dark smog. But, invisible to the naked eye, they possess a dirty secret: methane. In fact, roughly 80% of Europe’s LNG used by ships today are worse for the climate than the fuels they replace, due to the release of this potent gas which is over 80 times more warming than carbon dioxide.

A major problem is that across the gas supply chain, uncombusted methane leaks and slips into the atmosphere and it is warming the planet faster.

In a first investigation of its kind, T&E with support from hydrocarbons experts set out for sea to investigate methane slips from ships.

The investigation revealed significant amounts of unburned methane being released into the atmosphere with alarming repercussions for the climate. 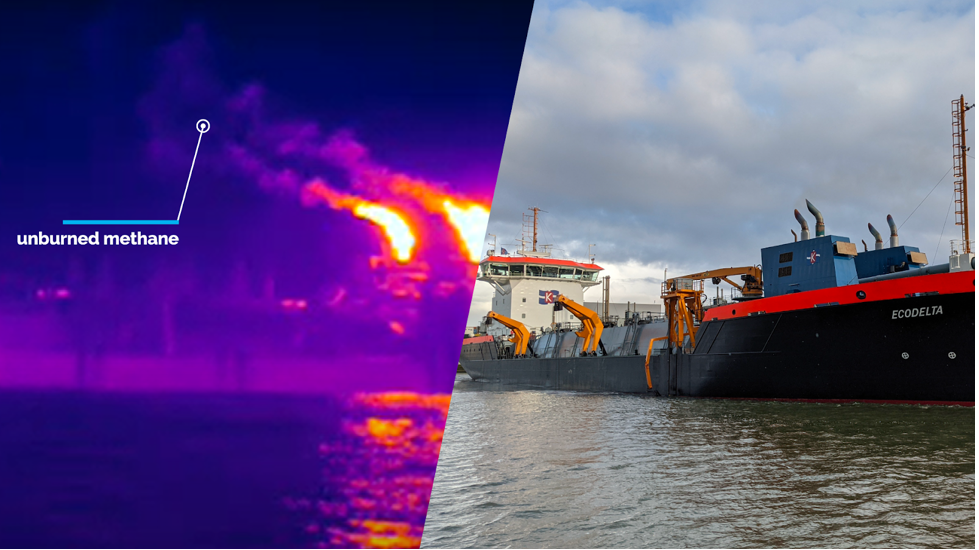 T&E carried out the investigation on a clear November day at the port of Rotterdam – Europe’s largest.

Using a state of the art infrared camera with a special filter to detect hydrocarbon gases, the T&E team set out on a boat to track down known LNG ships in the area.

According to an independent peer review of the images carried out by TCHD Consulting, an optical gas imaging consultancy, the images from the Ecodelta and a giant container ship from the French-based CMA CGM the Louvre are evidence that intense uncombusted hydrocarbon emissions were being released into the atmosphere.

While the bright red flames indicate the heat source, the plumes that trail off into the background are evidence of uncombusted hydrocarbon emissions. Though combustion of hydrocarbon gases may result in differing components, LNG typically contains over 90% methane. Therefore, hydrocarbon emissions seen in this investigation are primarily composed of methane.

According to CMA CGM, its LNG ships enable a significant reduction in CO2 emissions per container,and the company is investing heavily in LNG. Its website claims, “LNG is the best solution currently available to reduce the environmental impact of shipping.”

There is no mention in any of its communication of methane, or how much methane typically slips from its vessels. Either the company is guilty of blatant greenwashing, or, more worryingly, is unaware of the climate damage it is causing.

CMA CGM includes LNG on its website under ‘environmental services’ with statements like, “have a positive impact on public health and the environment with CLEANER ENERGY LNG”. There is no mention anywhere of methane emissions.

Europe’s dirty secret at sea: How the EU is promoting LNG

Shipowners commissioned more gas-fuelled vessels in 2021 than the four previous years combined, with LNG-powered ships promoted as a clean alternative to traditional fuels.

Last year, the EU proposed carbon intensity targets for marine fuels which would force shipowners to move away from residual fuel oil, the most widely used shipping fuel today.

However, T&E has warned that without sustainability safeguards this will simply lock in LNG as the cheapest alternative. Recent T&E analysis shows that over two-thirds of new ships could be powered with LNG from 2025. This would raise the share of fossil LNG from an estimated 6% today to over one-fifth of all marine fuels in Europe by 2030, locking in fossil fuel use for decades.

LNG is a fossil fuel. It is not the solution to clean up one of the world’s dirtiest sectors. The immediate threat of climate change means we cannot put more warming gases into the atmosphere.

To avoid this, the EU must adopt stricter greenhouse gas reduction targets for all ships arriving and departing from European ports, so that the sector achieves zero-emissions by 2050 at the latest.

Clean fuels do exist. Green hydrogen-based fuels can massively reduce shipping’s climate impact, but currently they are expensive. If policymakers set mandatory targets and incentives for these fuels now, it would stimulate supply and demand, and make them widely available at much lower costs.

Fossil gas has no role to play in the future of green shipping. Europe must end its dirty secret at sea, now.

What is natural gas?

Natural gas/methane/LNG is a fossil fuel that is extracted from underground. It is mostly made of methane molecules, which create CO2 when fully combusted. Methane is far more potent than carbon dioxide but it stays in the atmosphere for a much shorter time. Methane is therefore 29.8 times more warming than CO2 over 100 years and 82.5 times more warming over 20 years, according to the IPCC’s 6th Assessment Report.

Natural gas is “gaseous” under normal temperature and atmospheric pressure. To make its transportation and storage easier, it is often liquified under freezing temperatures, which creates liquified natural gas (LNG). Natural gas is used by many sectors, including by households for heating in boilers and cooking in kitchens, but also by power plants to produce electricity. Increasingly it is being used for shipping.

Why is methane so bad?

Leaks and slips occur throughout the natural gas supply chain. The use of LNG as a maritime fuel is particularly problematic because slips occur from ship engines. According to data from the International Maritime Organisation (IMO), depending on the engine between 0.2% to over 3% of fossil gas slips from the combustion process and is released directly to the atmosphere.

For this reason, about 80% of LNG that is burned today in shipping is in engines (low-pressure 4-Stroke) that have worse total greenhouse gas emissions than traditional engines running on dirty fuel oil. This is an estimation based on the fuel consumed by LNG-powered ships from the European data reporting system MRV, and fleet characteristics from shipowners’ order books.

Previous articleMichael Northrop, How is it possible that a project like the East Africa Crude Oil Pipeline (EACOP) could be under serious consideration in 2022 Next articleEEB/META, World’s First Special Rapporteur on environmental defenders now at the other end of the line