“Uber pollutes more than the cars it replaces – US scientists” 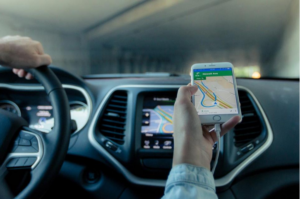 Ride-hailing services like Uber are increasing car travel, climate emissions and traffic congestion, according to a new US study.  Note 1.  Ride-hailing trips now result in an estimated 69% more climate pollution, on average, than the trips they displace, it finds. The data was published just weeks ahead of the first round of the Paris mayoral election, in which three candidates supported the #TrueCostOfUber campaign to cut the air pollution of services like Uber and to electrify their fleets.

Previous studies have examined the significant contribution of Uber-type services to congestion.  Note 2.  But this report – by non-profit advocacy group, the Union of Concerned Scientists – is the first attempt to assess their impact on carbon emissions compared to the private car rides and public transport journeys they replace. The scientists examined their impact in seven US cities: Boston, Chicago, Los Angeles, New York, San Francisco, Seattle, and Washington DC.

Despite ride-hailing vehicles being newer and having greater fuel efficiency than the overall vehicle fleet, the significant time that their drivers spend driving without a passenger means that they increase emissions. Ride-hailing drivers spend 42% of their service time either waiting for or driving towards a ‘pick up’.

Ride-hailing also emits nearly 70% more than trips that passengers would have otherwise taken by public transport, cycling or walking, the study found.

The report calls on Uber, Lyft and other ride-hailing services to electrify their fleets to have zero emissions, increase the share of pooled rides and improve connections to public transit hubs.

Calls for Uber to electrify are also increasing in Europe, where its impact on pollution and congestion are being raised by city officials. In Paris the current mayor, Anne Hidalgo, and two of her opponents for re-election – David Belliard (Green) and Danielle Simonnet (Left) – supported the #TrueCostOfUber campaign to reduce the impact of private hire vehicles like Uber on air pollution and require them to go zero emissions.

A petition supporting the campaign – led by T&E, clean air group Respire and citizens platform Sum of Us – has already collected 25,000 signatures.  Note 3.

In a statement issued to Respire, Hidalgo said: “Paris is the first French city to have introduced a low-emission zone, as far back as 2015. Because air pollution kills, diesel vehicles will be banned in 2024 and combustion engine vehicles in 2030. We are in the process of tackling this great challenge together with all professionals including, of course, the Parisian taxis but also the private hire vehicles, who must drive without polluting and must respect the social and economic rules of our country.”

Meanwhile, Belliard (Note 4) and Simonnet  (Note 5) announced their support for the campaign on Twitter.

The Paris mayor has limited legal power to cap the number of private hire vehicles or to impose emission criteria on these services. However, the city can steer these services’ operations, for instance through low and zero-emission zones or dedicated access to charging infrastructure.

Paris is Uber’s second biggest European market, second only to London. Since 2016, the number of private hire vehicles, including Uber drivers, operating in the Paris region has tripled, from 10,000 to 30,000, according to the latest data. Note 6.  The overwhelming majority (90%) of private hire vehicles in France are diesel and drive between 200-300km per day, worsening local air quality issues.

In cities, diesel vehicles are the main emitter of nitrogen oxides (NOx), which has serious health effects including heart and respiratory problems. The situation is already serious in the French capital, with more than a million Parisians breathing air that exceeds the recommendations of the World Health Organization.

T&E’s new mobility officer, Yoann Le Petit, said: ‘The impact of ride-hailing platforms on pollution is now widely documented and it is clearly negative. Just as more affordable electric cars are filling showrooms, companies like Uber need to go 100% zero-emission vehicles by 2025 if they want to continue operating in major European cities.’

The global #TrueCostOfUber campaign asks Uber to use only zero-emission vehicles in major European cities from 2025 onwards.

Originally published by Transport & Environment on March 19, 2020 at bit.ly/2y8rcba

Originally from Ireland, Eoin joined T&E’s comms team in September 2013 after stints at the European Commission and a Brussels communications company. Before that, Eoin worked as a subeditor at the Irish Times and other national newspapers in Dublin. He studied English literature and law at the National University of Ireland, Galway, and then a masters of arts in politics at University College Dublin.

As media manager of the T&E comms team, Eoin sees that our campaigns get the exposure they need across all media platforms. He also helps to write and publish the monthly T&E bulletin, capturing our work in eye-catching headlines and snappy prose. His passions include ferocious political debate and exploring flemish backstreets – both while discovering new varieties of the best beer in the world: Belgian.