The last few weeks have brought an exotic flurry to the seas and skies of Ireland. Feathered wayfarers from north and south have made landfall in a confluence that might, in ages past, have been taken for a divine omen. In late June, a cayenne tern, native to the Caribbean, was spotted for the first time in Ireland over Lady’s Island Lake, Co Wexford. On July 13, a brown booby was identified at Greystones, Co Wicklow. Boobies, native to the tropics of North America and West Africa, have never been recorded on the Irish mainland before. Not to be outmaneuvered, another was spotted on a fishing boat 150km off the south coast of Cork last week.

These isolated cases do not necessarily herald a broader trend. Indeed, the more we learn about sea birds the clearer it becomes that many travel even greater distances than had previously been believed. An ongoing study of over one million banded birds, conducted by the British Trust for Ornithology, logged such aeronautic feats as a Manx Shearwater’s 7,564-mile journey from the Hebridean Isle of Rùm to Argentina. Nonetheless, the consistent, abnormal presence of tropical birds across Northern Europe is almost certainly an augur of climate change. In an interview on Moncrieff, BirdWatch Ireland spokesman Niall Hatch explained, “The seabirds we see normally in Ireland like cold water– It tends to be better for fish and plankton and so on. But these are birds that are adapted to warm water, so if ocean temperatures are rising, it might be encouraging some of these birds to move further north.”

At the same time that these southern visitors were making landfall, 10 white-tailed eagles boarded a plane from Norway to Co Kerry. They will be transported to Lough Derg, the Shannon estuary, and Killarney National Park, where they will join the 100 that were released between 2007 and 2011. So far, the birds have held their own and successfully fledged at least twenty-six chicks. If all goes according to plan, they will expand their range across a broad swath of western Ireland in the coming years. They are not the only raptors that have made a comeback. Buzzards, not long ago reduced to a few breeding pairs on the Antrim coast, are now fairly common, and the red kites introduced to Co Down in 2008 are now in their second and third generation. 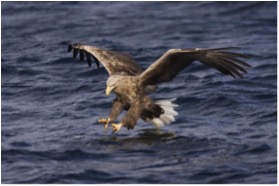 Despite these glimmers of hope, birds across Ireland face grim prospects. Sixty percent of the 202 species of commonly occurring Irish birds are now on the red and amber conservation lists. There has been a forty percent decline in waterbird species in the last twenty years alone. Ornithologists at University College Dublin and the University of Aberdeen have discovered that 71% of ground-nesting bird species, which include the famed corncrake and curlew, are in decline. The woes of Ireland’s birds are linked to the dire state of its habitats. Over ninety percent of the 58 Irish habitats listed under the EU Habitats Directive have “inadequate” or “bad” status. Eighty-five percent of internationally important and EU-designated habitats are in bad condition, and only one-third of hedgerows surveyed are in good condition.

The situation is so grim that last month the European Commission referred Ireland to the European Court of Justice for failing to establish the necessary conservation measures for a single one of its 423 “Special Areas of Conservation.” BirdWatch Ireland, an organization devoted to the conservation of Irish birds, has identified two principal reasons for this dysfunction: the lack of staff resources at the National Parks and Wildlife Service and a chronic dearth of political will. Ministers responsible for the NPWS have, writes Paddy Woodworth in the Irish Times, “paid unctuous lip service to the beauties of Irish natural landscapes, while presiding over their continuing degradation.”

Recent domestic developments give cause for measured optimism. BirdWatch Ireland broadly endorsed the new Programme for Government, welcoming its roadmap to reducing greenhouse gas emissions and paying farmers for ecosystems. However, the organization noted the Programme’s shortcomings on other fronts. It contains no concrete commitments to the EU Biodiversity Strategy 2030, provides no additional funding to the National Parks and Wildlife Service, and declines to specify the means of achieving many of its more ambitious goals. Another source of anxiety in recent months has been the government’s decision to move responsibility for nature and biodiversity to the Department of Housing. In a joint statement, BirdWatch Ireland, the Irish Wildlife Trust, Friends of the Earth, An Taisce, Swan and the Environmental Pillar pilloried the move. Their concern is justified, but the responsibility of Green TD Malcolm Noonan for the NPWS is encouraging. Environmental campaigner John Gibbons heralded Noonan’s selection as “good news for biodiversity in Ireland.” Noonan has pledged to make progress on SAC designations and stated that he will be “continuing apace with the process of formal designations, development of conservation objectives and management plans for our protected areas.” 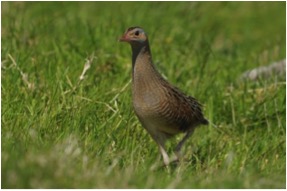 News from Brussels is more worrisome. Only a few days after the bloc’s 27 environment ministers signed a joint statement advocating a green recovery from the pandemic, the EU rescue package reduced the size of the EU’s Just Transition Fund and lowered the climate measures needed for countries to tap the money. The fund will now receive a combined €17.5bn from the budget and recovery fund – down from a proposed €37.5bn. InvestEU, a fund designated under previous proposals to help meet environmental targets, was slashed from €31bn to €4bn. And while states were previously required to implement a national target for emissions cuts, the new plan mandates only that they must commit to the EU’s goal to become climate neutral by 2050. These cutbacks increase the burden on domestic budgets and regulations to take proactive measures and close the funding gap. The new CAP budget is €356.3bn, a €35.2bn reduction on what was initially proposed. Following the announcement, Tim Cullinan, president of the Irish Farmers’ Association, noted that the approved funding is insufficient to meet the EU’s goals under the European Green Deal. The Irish Government, he made clear, will need to make up the difference if it plans to achieve its environmental targets.

On July 27, Farming for Nature, an initiative that supports farmers who cultivate their land in a way that improves the health of ecosystems, hosted a webinar with Feargal ó Cuinneagáin, who farms ten hectares on the Mullet Peninsula. NPWS and ó Cuinneagáin entered an agreement under the NPWS Farm Plan Scheme in March of 2016 with the aim of returning corncrakes to the property while also providing habitat for twite, chough, barnacle geese, and other species. The plot began as a grass monoculture but now includes beds of nettle, iris, and hogweed, multispecies swards, and flourishing hedgerows. To ensure that the corncrakes have time to rear their young, which hatch in two separate broods each summer, ó Cuinneagáin cuts his hay meadow in October. 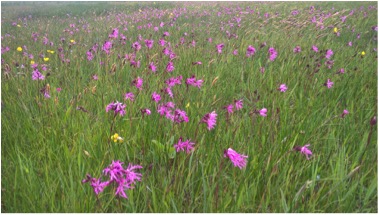 Photo by Farming for Nature

One issue that came up in the webinar was the dilemma of which species to prioritize for conservation. Earlier this year, the Department of Arts, Heritage and the Gaeltacht launched a €5.9 million, five-year conservation project to protect the corncrake’s two remaining strongholds in coastal Donegal and Connacht. Critics argued that these funds, €4 million of which came from the EU’s LIFE Programme, could have been better spent on keystone species with a bigger ecological impact across Ireland. These concerns are valid, but the trade-off between spending on one species versus another is rarely absolute. Restored corncrake habitat on the Mullet and in Donegal and Connacht will have knock-on effects that benefit other grassland species. These include relatively common birds that are often overlooked in conservation initiatives and that, while not facing outright extinction in the short term, are suffering rapid population decline. Barry o’Donoghue, co-host of the webinar and founder of the Irish Hen Harrier Winter Survey, said, “When you’re protecting corncrake you’re not just protecting corncrake, you’re protecting the whole ecosystem, from skylarks and meadow pipits to early purple orchids.” Birds are harbingers of otherwise subtle ecological shifts, and corncrakes are the harbingers of the harbingers. They help counteract common misapprehensions of what it means for an ecosystem to collapse. Depletion is often invisible to the casual observer, as evident in the many people who view Ireland’s bucolic fields and treeless uplands as intact, wild ecosystems. Corncrakes and other indicator species can serve as a wakeup call, but the call is not just to help the corncrake but to address the broader causes of their decline.

Most of the webinar was devoted to a question and answer session, which focused on how to scale up and popularize the Farm Plan Scheme, which suffered cutbacks in the aftermath of the 2010 crisis. When asked “have you had much interest from neighboring farmers or do they think you’re buck mad?” ó Cuinneagáin replied without a trace of hesitation or amusement: “If you have good schemes which pay farmers in a results-based fashion, farmers will go into it. You need to be financially rewarded for the work you put in, and you also need advice and enthusiasm.” The panelists suggested a results-oriented rubric with scoring according to preset criteria for farmers who enter into the scheme. Past and ongoing ecosystem services schemes can serve as templates. One example is the Developing Results Based Payment Schemes, an EU pilot program that rewarded farmers for conserving plant species and ground-nesting birds. The payments were made on the basis of results: biodiversity maintained, not actions taken. Other ongoing successes include the Hen Harrier Programme, which uses EU funding to incentivize farmers to maintain and enrich habitat in the six Hen Harrier Special Protection Areas. 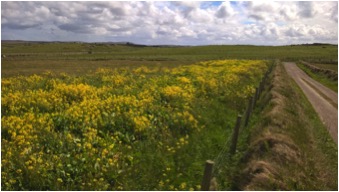 Photo by Farming for Nature

o’Donoghue told those interested in improving habitat quality on their own land to consult the NPWS Farm Plan Scheme and the Farming for Nature website, which has information on multispecies meadows and pond construction, among other topics. He emphasized that people with small plots of land can also make a difference. For those trying to decide on a course of action, he counseled that sitting and observing should be the first step: “You might think you should install a border, but if there are lapwing or curlew around that could be the worst thing you can do. Determine what’s on your land. If you don’t have the necessary skill set, it’s a small enough country that you can find knowledgeable people that won’t be too far away.” 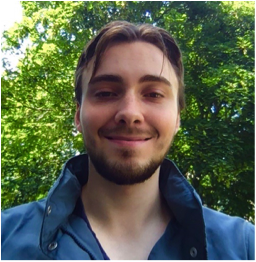