People are driven from their homes, temporarily or permanently, by a number of events.  When they are natural events, such a volcanic eruption or earthquake, or climate change, which triggers extreme heat or flood events, the people who are displaced are referred to as environmental refugees.  The distinction between a natural and an environmental event are being blurred as climate is triggering and being affected by natural events. 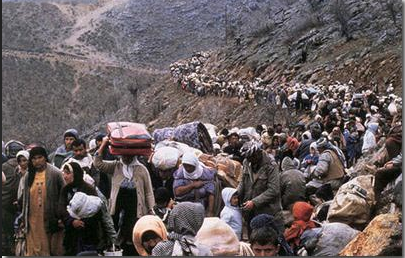 Many refugees are considered internal migrants when they move to someplace else in their own country, while some become immigrants in other, usually adjacent, countries.  In either case, the sudden, sometimes massive influx of displaced people creates unsettling socio-economic stresses on the host area or country.  Such mass migration may include significant deterioration of the environment where the immigrants settle.

Some further ideas to explore on Environmental Refugees:

Are there different rules applied in your country to those who migrate to your country from another country because of war, or armed conflict and because of extreme weather events or climate breakdown?

If someone migrates to another country because of an economic disaster caused by climate breakdown, e.g., prolonged drought, are they environmental refugees?  What are their rights?

Alex Randall, “Environmental refugees: who are they, definition and numbers,” Climate and Migration Coalition bit.ly/3fupFiF