Mercury is a naturally-occurring chemical element found in rock, including in deposits of coal.  It is found in three forms: elemental (metallic) mercury, which is liquid at room temperature and present in older thermometers and fluorescent lights; inorganic mercury, which can be found in water and soil; and, methylmercury, which is a combination of mercury and other substances including carbon. 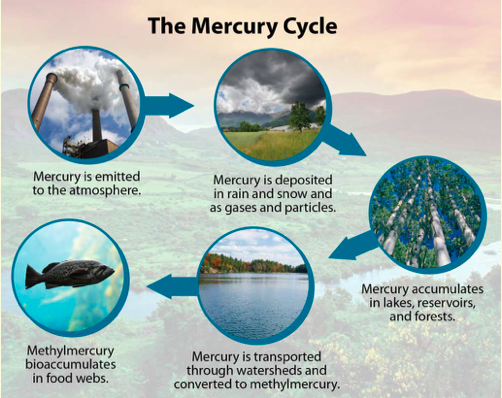 Mercury can be a nasty chemical.  Breathing in mercury vapor, as in emissions from power plants, is dangerous and the mercury air pollution can travel long distances before settling in water or soil.  Eating fish and shellfish contaminated with the highly toxic methymercury can be deadly.  The mercury poisoning disaster in Minamata Japan is a well know mercury disaster.

There are established efforts in the EU and US to reduce or eliminate mercury from the environment, as well as the UN Minamata Mercury Convention.

Some further ideas to explore on Mercury Pollution

What form of mercury is found in fish?

How can you be assured the fish you eat is not contaminated by mercury?

What does mercury have to do with the phrase “mad as a hatter?”