Increased vehicle traffic in remote areas of the countryside has led to more and more roadkill of animals.  Deer, opossum and racoon carcasses along highways is evidence.  And collision damages to the vehicles are growing, amounting to $8 billion each year in the US.

What is not so apparent is the loss of habitat for the animals.  Road systems affect the ecology of one-fifth of the land area of the US, splitting habitats.  Wildlife bridges allow the animals to continue their path within their habitat, which would otherwise be blocked by asphalt. In California the world’s largest wildlife overpass, 210ft long and 165ft wide, is under construction across the 101 highway near Los Angeles.  It will provide safe passage for lizards, snakes, toads and mountain lions, with an acre of local plants on either side and vegetated sound walls to dampen light and noise for nocturnal animals.

The Netherlands alone has 66 overpasses to protect its wildlife populations; namely badgers, boars, and deer.  Even 50 million red crabs have been provided a bridge on Christmas Island in Australia to help migration from the rain forest to the ocean. 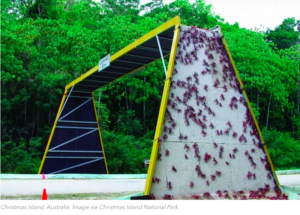 In some instances there has been up to a 90 percent reduction in vehicle-animal collisions where these bridges have been built.

Some further ideas to explore on Wildlife Bridges:

Where is the nearest wildlife bridge to you?

What animals does the bridge serve?

Identify the nearest area near you that needs a wildlife bridge, and what would it cost to build?

Erin Kelly, “25 Animal Bridges That Are Keeping Wildlife Safe From Humans And Their Cars,” All That Interesting (May 2019). bit.ly/3EIPtCo

Jessica Stewart, “Bridges for Animals to Safely Cross Freeways Are Popping Up Around the World,” My Modern Met (9Feb 2017).  mymodernmet.com/wildlife-crossings/