Much of the talk about agriculture and the environment centers on the adverse climate impacts from methane emissions from livestock.  That is a critical discussion, especially in Ireland where about a third of greenhouse gases (GHGs) come from agriculture and the government is supporting an expansiom of the sector.  But also of deep concern are the adverse impacts on water resources from agricultural practices.  A new study from the European Environment Agency (EEA), Water and agriculture: towards sustainable solutions (2021), offers some clear insights into the nature and scope of these threats, and how we can avoid or minimize them.

In 2016 only about half of surface water bodies and a quarter of groundwater in the 28 Member States of the EU and Norway had achieved “good status” under the Water Framework Directive (WFD).  Agricultural practices constitute one of the key pressures on these water resources as a result of diffuse pollution from nutrients and chemicals, water abstraction, and hydromorphological changes. 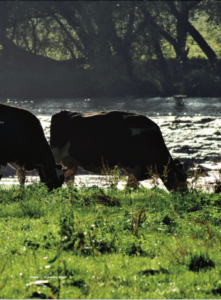 Diffuse, or non-point, pollution from agriculture spreads across the land surface and into water resources, in contrast to industrial plant pollution that typically discharges through a pipe directly into the water resource.  Pollution from a pipe is visible, more easily identified, and better controlled than toxic materials spreading across the landscape.  The pollutants include fertilisers, nitrates, metals, veterinary medicines, and pesticides.  And with more dense livestock and more intense use of arable land, there are more pollutants.

Withdrawing, or abstracting, water from surface bodies or groundwater for agriculture remains a major stressor.  Using irrigated water tends to increase the value of crops as the yield is higher than with rainfed production.  No wonder agriculture accounts for 24% of total water abstraction in the EU-28, with particularly heavy abstraction in Spain, Italy, Greece, France, and Portugal.  About 37% of water abstracted for agriculture in the EU-28 between 2008 and 2017 was from river water bodies, followed by groundwater (36 %) and reservoirs (27 %).   Abstracting water from the Shannon River in Ireland will create intense competition between agriculture and eastern urban centers. 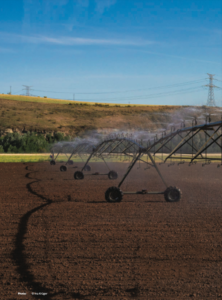 Some improvements to water quality have resulted from the Water Framework Directive.  For instance, nitrate concentration in rivers has reduced by twenty percent since 1990 and agricultural abstraction by twenty-five percent.   But pressures from high nitrogen levels and excess abstraction, especially in southern parts of the EU, continue to present substantial threats to EU waters from agriculture.

As these risks remain, they will also intensify as a result of climate breakdown.  For example, precipitation will increase in some, generally northern, areas, where more rain will carry more pollutants to water bodies and flood soils.  In southern parts the rain will decrease and worsen already arid conditions, putting extra stress on crops.

What the EEA learned through its study is that the risks from agriculture will not be resolved merely by examining and improving EU water policy. Rather, sustainable agricultural practices are inseparable from farmers’ incomes, societal and life-style choices, consumer demands and wider market forces.  We would add that social activism in support of climate action also cannot be ignored.

The report finds that sustainable agriculture demands widespread adoption of agroecological principles, as well as organic farming, which need to be aligned with the Common Agriculture Policy (CAP).  It will also require significant systemic advances in food and energy policies.