An Independent Assessment of UK Climate Risk and Adaptation

Even if progress is made on reducing greenhouse gas (GHG) emissions in the near future, even if we approach or achieve Paris Accord based emissions targets, there are significant risks for the environment and health that are already baked into the earth.  These risks are not going to be prevented or disappear because of mitigation and they have to be dealt with.  Dealing with such risks is the goal of adaptation.

By 2050, the heatwave summer of 2018 will be a typical summer, summer rainfall could fall by as much as 24%, and winter rainfall increase by as much as 16%, changes that will impact our well-being, the natural environment and the economy.

Much focus had been placed on reducing emissions and less on managing the impacts already unfolding.  A recent report from the UK Climate Change Committee redresses this imbalance by providing a broad and detailed assessment of adaptation risks in the UK.   The report discusses eight priority adaptation areas that require urgent attention, and it covers ten principles for solid adaptation policy.  The Committee also provides a 1,500 page technical report that assesses sixty-one risks and opportunities, including an assessment for Northern Ireland.   The full report is the product of several hundred experts across the UK over the past three years.

Risks to the viability and diversity of terrestrial and freshwater habitats and species from multiple hazards.

The critical adaptation services of these habitats include CO2 removal, water supply, flood protection and cooling.  And these habitats and species require specific action to survive, including, for example, increased shading of rivers with trees, fish passages, mixed planting and removal of dead wood to reduce wildfire risks.

At particular risk are the UK upland areas where 75% of the upland species face a decline by the end of the century. These areas include a high percentage of UK’s agricultural land and national parks, which provide essential ecosystem services such as carbon sequestration and water resources.

Risks to soil health from increased flooding and drought

If we want to reduce UK greenhouse gas emissions to Net Zero, we will need healthier soils to support increases in agricultural productivity.  Soil-friendly farming practices include no-till and precision farming, minimising erosion and pollution, and good water management on agricultural and forested land to keep soil moisture in balance. We also need to strengthen soil monitoring to understand the current condition of soils and the future success of adaptation actions.

Carbon is stored in soils and sediments, trees, saltmarsh and kelp forests. Human activity is exerting pressures on all of them through pollution, erosion, degradation and loss, and through damaging practices such as peat extraction and rotational burning.  Peatlands are particularly critical as they store over 25 times more than the UK’s total current annual emissions and an order of magnitude higher than the carbon stored in trees.

Hotter, drier conditions reduce the functioning of peatlands and forests and threaten their existence. These habitats face erosion from wind and rain, and increased risk of fire damage.  To adapt to these changes we need spatial targeting of land use policies to match changing conditions, including better species choices by planting the right trees in the right places, restoring degraded peatlands and monitoring soil carbon.

Because of heat and drought impacts from climate change, as well as flooding, fire and pests and invasive species, adaptation will require a range of new varieties of crops, livestock and trees.  As part of this development of resiliency, there will have to be changes in land management practices, including better technologies for managing water resources, nutrient input and soil conservation.  Such shifts will require long-term planning that must start now.

Other adaptations actions include better long-term seasonal forecasts for land managers, and assessment of land use options given changing water resources.

Risks to supply of food, goods and vital services due to climate-related collapse of supply chains and distribution networks

The ever-growing complexity of supply chains provides a clear glimpse into a field that is going to require more and more adaptation to climate shifts.   Extreme weather is already causing major disruptions of supply chains and that will worsen as climate breakdown increases.  For example, heavy flooding in Thailand in 2011 disrupted five major manufacturers of hard disk drives, which resulted in a 30% drop in product and an increase in global prices by 80-190%.  The World Bank estimated that this one disruption cost US$45.7 billion, equal to about 13% of Thailand’s GDP.

Suppliers report that heavy rain, flooding, and high temperatures figure prominently for supply chains, and those conditions will worsen.  To counter these developments, the sector needs better information about unfolding climate changes, more diversification of chains, and expanded capacity to manage these risks, especially with new technology and infrastructure.  Certainly our experiences with COVID 19 and supply chains has been instructive.

The power system will increasingly be electrified as we move to Net Zero GHG emissions.  Electricity currently provides about 15-20% of energy and by 2050 it is expected to provide about 65%.  The more we depend on electric power, the more vulnerable we will be to any breakdown in the supply.  For example, a lightning strike on an electricity circuit between Cambridgeshire and Hertfordshire in August 2019 led to a cascade of impacts on other generators, interrupting supply to over 1 million people and stranding affected trains for hours.  We need more resilient critical infrastructure and more systemic risk assessments to preserve the power system.

Risks to human health, wellbeing and productivity from increased exposure to heat in homes and other buildings

During the 2002 heatwave in England, there were more than 2,500 heat-related deaths.  With the expected rise in heat waves through 2050, deaths are likely to rise to 7,000 per year. With more and more people working at home, heat in the homes will have larger and larger impacts.

Some of the adaptations available — passive cooling measures like better shading, reflective surfaces and green cover — are not particularly new or difficult to implement.  Yet little corrective action has taken place while 300,000 homes are scheduled to be built each year in the UK. It is no secret that insulating an already built home is significantly more expensive than insulating during initial construction.

Multiple risks to the UK from climate change impacts overseas

The COVID-19 pandemic, and panic, has shown us how a cascading global event can unfold with devastating costs.  While current risk assessments focus on single events, single sectors, and reasonable worst-case scenarios, adaptation to climate breakdown demands global assessment and focus on cascading climate risks.

In addition to the eight areas that require adaptation, now, the report discusses ten principles that apply to the implementation of the adapations.  They are outlined in Figure 2. 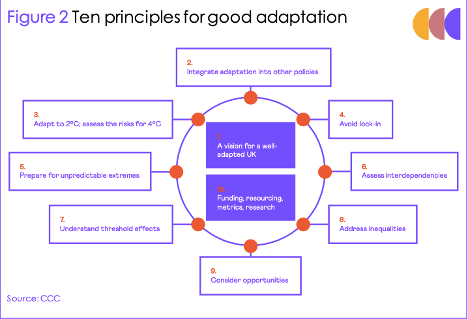