What specific facilities or structures constitute the infrastructure can vary.  In a recent UK National Infrastructure Commission report on resilience the Commissions includes energy, transport, water and wastewater (drainage and sewerage), waste, flood risk management, and digital communications as infrastructure.  Housing and schools are excluded from the Commission’s consideration.  The report notes that its analysis and discussion were concluded before the effects from the cornavirus crisis could be considered.

The Commission’s role is to offer impartial, expert advise to the UK government on major long-term challenges to infrastructures, not unlike what the UK Committee on Climate Change (CCC)  does for climate change.  The focus of the Commission’s recent report,Anticipate, React, Recover: Resilient infrastructure systems is on the need and capabilities for resilience in the infrastructure. 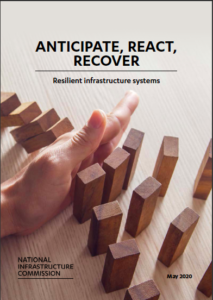 The issue is particularly pressing for two reasons.  First, the unfolding impacts from climate change are increasing stresses on our infrastructure.  As the commission notes, “The risks of disruption will be exacerbated by climate and other changes.”  At 7.  Yet the specific locations and scope of these impacts are unclear, which makes planning to account for them difficult, and so flexibility, or resilience, is critcal.

Second, almost every nation is facing dire needs to rebuild economies devastated by the coronavirus crisis.  Investing in infrastructure improvements offers easy and direct means of boosting the economy, including jobs, while providing critical long-term additional benefits.  Such projects are often described as “ready for shovels in the ground.”  That is, there is no new technological advance needed, and planning is often routine.

The challenge is to deal with the rising tide of climate change and the need to act quickly on investment options.   For example, expanding digital communications to rural or remote locations is a more sustainable investment than road construction, which carries with it adverse climate impacts from increasing reliance on car and truck transport.

Over the past several years we have witnessed instances of the disruption of infrastructure in the UK: loss of water for 200,000 people over four hours; loss of mobile network access for a day for 30 million people; power outages for 1.1 million people.

The report offers a number of recommendations to strengthen the resilience of the infrastructure to avoid such disruptions.

The first, and strongest, is a statutory requirement for Secretaries of State to publish resilience standards every five years, starting in 2022, for the energy, water, digital, road and rail infrastructures.  The standards must be “clear, proportionate and realistic.”  The 5-year target may have been influenced by the Committee on Climate Change, which is required to set targets for the government to reduce greenhouse gas emissions every 5 years.

Setting periodic reviews keeps the pressure on governmental agencies to continue to update, and strengthen, standards.  They also help assign responsibility for those who fail to provide the protections against disruptions when they occur, and when often the government has to intervene to help those communities affected.   The recommendation also recognises that different areas may require different standards.  For example, dense cities may need more spare capacity for a particular infrastructure (e.g., water) than sparse rural areas; rural areas may need more public support for digital communication than crowded cities.

The second recommendation is for operators of existing infrastructures to apply stress tests: “thorough, desk based testing used to determine the stability of the system and determine its ‘breaking point’. “  At 31.  Such stress tests will allow operators to anticipate disruptions rather than to react to disruptions after they occur.  It is better to anticipate future shocks to the systems by facing uncomfortable truths than scramble to deal with disruptions that could have been foreseen.   The report notes that stress testing has been successfully employed in the financial sector.

The third recommendation is for operators to develop and maintain long term resilience strategies, especially in light of the unfolding climate changes.   Many infrastructure assets are long-lived and engineering standards change over time.  Such factors need to be considered when determining what level of spare capacity and backup systems are necessary. 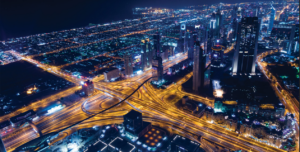 Several other influences on infrastructure are highlighted by the Commission.  Notably it discusses how the market is not well suited to dealing with infrastructure.  At 20-21.  Consumers are not provided with real choices about the level of resilience they can purchase in the market.  For example, generators are available but expensive, especially for low probability events.  Moreover, when a major disruption occurs, governments are invariably responsible for responding and those who cannot pay for damages seek and get public support.  The market does not generally account for such situations as it focuses on those who can pay their own way.

Another influence that needs to be considered is the “functional dependencies” between infrastructures, which can result in cascade failures.  Operators of rail systems need to consider resilience of flood protections as failure there can cause failure in the rail system; loss of power can affect wastewater systems.

With such recommendations and considerations, the Commission notes that operators of infrastructure systems “…. can stay a step ahead of all the obstacles our infrastructure
will face..[and] we can engineer a trajectory to prepare for disruptions and failures and make sure we can cope when things do go wrong. This should be achieved by establishing clear standards, ensuring systems are tested regularly and that operators take action to deliver resilience both now and in the
future.”  At 5.

Fiona Harvey, “UK infrastructure ‘under threat from climate breakdown’,” The Guardian (28 May 2020). bit.ly/2CDcPxz

Previous articleDangers from Particulate Matter in Small Towns in Ireland: Time to Ban Peat and Wood as well as Coal? Next articleA Report on Climate Risks to U. S. Financial Systems: A Wake-Up Call for Regulators