Dangers from Particulate Matter in Small Towns in Ireland: Time to Ban Peat and Wood as well as Coal?

A recent study for the Irish EPA by a number of researchers from University College Cork (UCC) has examined the issue of how particulate matter (PM), especially PM2.5, is affecting small towns in Ireland, and the policy implications of these effects.  The study’s contribution to understanding air pollution in Ireland is much enhanced by its clear, concrete (i.e., non-academic) writing.

Particulate matter (PM) are small particles of solid or liquid matter suspended in air that present a significant source of pollution, and health risk.  While some PM is visible, much of it is not and the smaller particles, PM2.5, are 2.5 micrometers or smaller, about 30 times smaller than a single hair from one’s head.  Smaller PM are particularly dangerous because they can more easily penetrate into the lungs or even bloodstream. 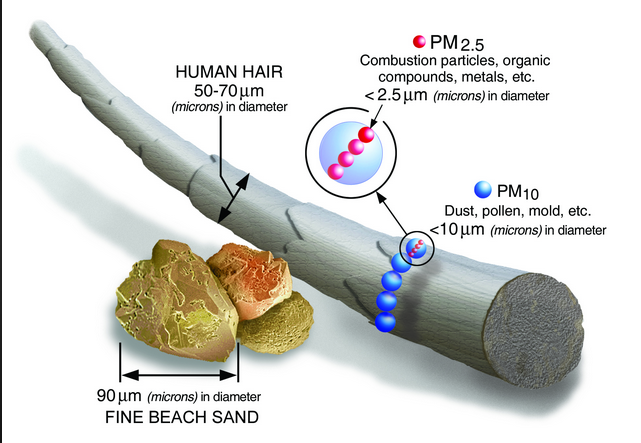 The risks of PM2.5 for respiratory and cardiovascular health are well-known, and emerging research indicates adverse impacts on brain functioning.

The study reminds us that recent studies estimate that long-term exposure to PM causes 400,000 premature deaths annually in Europe.   At 1.

Earlier studies have shown that burning of wood, coal, and peat is a significant source of PM in urban environments, and the focus has been on Ireland’s larger cities.  This study advances our understanding of the effects of PM2.5 on smaller towns and the policy implications.

The study identifies the most significant sources of PM2.5 in small towns in Ireland, and apportions the pollutants by source.  The towns chosen are Killarney, Enniscorthy,  and Birr.  These towns have no natural gas supply and are outside the areas subject to the ban on smoky coal so the residents most likely depend on solid fuels — wood, coal and peat — for heating.

The study used field measurements during the wintertime, during the day and evening, to measure the levels of PM in the three towns.  Importantly, it also used sophisticated single particle mass spectrometry techniques to differentiate combustion particles produced from the main solid fuels – coal, peat and wood.  Finally, receptor modeling was used to confirm the results.

The results indicate that residential solid fuel burning was the dominant source of PM2.5 at all three locations representing 72% in Killarney, 82% in Enniscorthy, and 60% in Birr.  Traffic and sea spray were minor sources.  Interestingly, the study found that gaseous amines and ammonia from agriculture activities combined with combustion aerosols to accelerate and increase PM2.5 mass.

As for differentiation between the dominant sources, it was found that peat burning was the main contributor, accounting for 31%, 27% and 26% of the PM2.5 mass in Killarney, Enniscorthy and Birr, respectively    Wood was the second most dominant combustion source (17%, 21% and 23%, respectively), followed by coal (16%, 17% and 5%, respectively).

Particulate pollution was highest in Enniscorthy exceeding the WHO 24-hour guideline value of 25ug/m3 on 42 % of the days.

The study also found that levels of PM2.5 were an order of magnitude higher in the evening than daytime, and there were elevated levels when winds were low.

Perhaps the key finding of the study was that all three solid fuels were found to be significant sources of PM2.5, and that, at least marginally, peat and wood were larger contributors of PM2.5 than coal.

As the study notes, Ireland’s ambient air is generally better than most EU countries, but elevated levels of PM continue to present health risks.  Indeed, the World Health Organization (WHO) finds that there is no threshold below which PM does not adversely affect health.

The new government has just announced that it is extending the smoky coal ban to towns with more than 10,000 people.  However, that may not be protective enough.

The report concludes that “As there was not one dominant solid fuel type that contributed to particulate pollution, measures such as a smoky coal ban in these areas may be only partly successful in reducing PM2.5 concentrations.”  At ix.

It is always a pleasure to see solid, clear science lead to direct policy implications.  Now it remains to be seen if the new government listens.

Previous articleDefending Those Who Defend the Environment Next articleInfrastructure: hidden but critical