Report on Destructive Nature of Fossil Fuel Subsidies in Ireland

A recent report, researched and written by Clodagh Daly and commissioned by Friends of the Earth (Ireland), lays out in clear detail and supported by a weight of authority the case against subsidising fossil fuels in Ireland, or anywhere else.

Around the same time, 200 medical groups representing 40 million health professionals worldwide told G20 leaders, in an open letter, that the trillions of dollars, euros and yuan that are being spent to sustain post-pandemic economies must build a “healthy and green recovery.”  Those efforts must include “removing hundreds of billions of dollars in subsidies for oil, gas and coal, the main drivers of both global warming and air pollution.”

This news is not new but it remains critical.

Why should companies enjoy “fossil fuel welfare” (Lenfera) when their leaders and supporters are often railing against individuals getting social welfare to help pay for food and other necessities.  Is fossil fuel a more important necessity than food?

The report focuses on the definition of “subsidiary,” in this context, as “any form of government action that lowers the cost of natural gas, reduces market risks associated with natural gas, and pays the costs to environment and public health caused by extracting and burning natural gas.”  At 18.  The report centers on natural gas because the Irish government has announced that it will continue to permit exploration and extraction of natural gas but not most oil exploration.

While it seems straight-forward, the meaning of subsidiary as applied becomes unclear as to what to include and what to exclude.  Thus, we have major international institutions estimating fossil fuel subsidies, world-wide, at between €340 billion and $5.2 trillion.

Calculating the subsidies for an individual country is somewhat easier and the report estimates that Ireland subsidises the fossil fuel industry at a cost of €2.5 billion each year.  That amount is 200 times what Ireland contributes to the UN Climate Fund, a disturbing comparison.

At the same time Ireland is paying fossil fuel companies in the form of subsidies, the country is running out of its share of a global carbon budget to keep warming below 1.5°C, as promoted by the Paris Accord.  Indeed, Ireland has already spent  €120 million of public money on carbon credits to offset its failures to meet its international obligations on GHG reductions.  To meet the 2020 EU emission targets Ireland will have to spend another €150 million.

Wouldn’t it have been fiscally prudent to deduct those €270 million from the fossil fuel subsidy?

Just what do these subsidies do for the companies, and the economy.  Basically they indicate that investment in natural gas is important to the common good, at least in the eyes of the government.  They also reduce the risks of producing natural gas, and that makes gas more readily available in the market.

In other words, the cheaper it is to bring new natural gas reserves into operation to industries and consumers, the more gas we will have.

Unfortunately for the economy and the common good, that means we will also have more greenhouse gases (GHGs), and renewable sources of energy will have more difficulty competing with natural gas.

In addition to dealing with the general rationale for the subsidies and the adverse consequences of same, the report delves into four case studies of how subsidies operate in Ireland, and with what effects.

The first study is a case of public finance through support from domestic, bilateral, EU and multilateral international agencies through the provision of grants, loans, equity and guarantees.  The Irish example is a €100 million loan provided to the Gas Networks Ireland from the European Investment Bank to upgrade and expand the gas network and facilitate the expansion of so-called renewable gas from anaerobic digestion. Central to the GNI’s outlook for the use of natural gas in a low-carbon energy system, and its promotion efforts, is the use of carbon capture and storage (CCS) technology, which technology has yet to prove its viability. 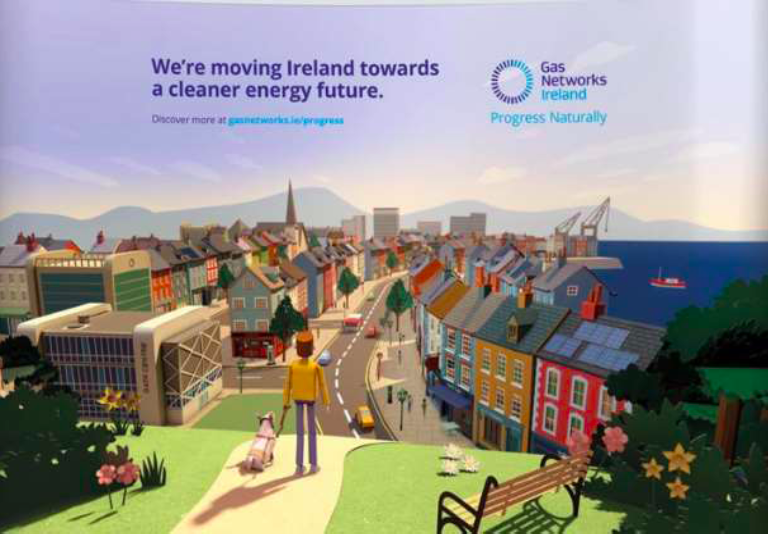 The second study is a case of tax exemptions or ‘fossil fuel welfare’ for offshore exploration regime.  Benefits granted to fossil fuel exploration in Ireland are generous to a fault.  For example, companies that receive a license to drill for oil and gas in Ireland are required to pay only 25% corporate tax on profits, compared to 40 – 85% elsewhere, and In Ireland 100% of the operating costs of the business can be offset against the 25% tax rate.  Royalties on the profits of oil and gas extraction have been banned since 1987 in Ireland.  And exploration companies own 100% of the oil and gas found under Irish waters and are not required to sell any reserves found back to the State.  Since the Irish people receive so few benefits from fossil fuel exploration, there should be few qualms about ending subsidies for that exploration.

The third study is a case of investments by State-owned enterprises.  The Irish example is the Electricity Supply Board’s plans to construct four new gas plants in Ireland at a projected cost of €700 million. The report submits that there is no justification for building four new gas plants at precisely the moment when we need to be retiring fossil fuel infrastructure to align with the Paris Agreement. According to the ESB’s own projections, almost a third of total electricity demand will come from data centres by 2027.  As a result the new gas plants will extend by decades a reliance on fossil gas at precisely the time that Ireland should be abandoning fossil fuels.

The fourth study is a case of fiscal support through direct spending by government agencies, and income or price support.  The Irish example is funding by the Science Foundation Ireland (a semi-state body) for the Irish Centre for Research in Applied Geosciences (iCRAG) at University College Dublin (UCD).   The overarching objective of iCRAG is “to significantly de-risk Ireland’s offshore and onshore hydrocarbon and mineral resource exploration, increasing exploration activities.”  At 40.  This publicly funded research is carried out in partnership with the natural gas industry.

At the end of each discussion there are a wide range of policy recommendations.

The Inevitable Demise of Fossil Fuels

Despite the advantages that the subsidies provide to the fossil fuel companies, and the existence of some 2860 Gt CO2 in known fossil fuel reserves, worth $27 trillion, the days for such support for fossil fuels seem numbered.  In 2017 Liquefied Natural Gas (LNG) terminals in Europe operated at only 25% of capacity, and over the past decade their profitability has decreased.  At 22-23.  Both are important signals for the Shannon LNG terminal.

Moreover, in 2014, 50 gas fired power stations shut down across the EU at a cost of  €6 billion.  The report notes that,   “Building new renewable energy infrastructure is likely to be cheaper than the operating costs of existing gas infrastructure within just two decades, a ‘sobering risk’ for investors.”  At 23.

Many supporters of the subsidy would argue that since natural gas infrastructure requires 30 – 40 years of planning, any settled plans would be hard to pull back from.  Yet that is what we are seeing in the coal industry with coal plants across the globe being closed, and coal assets widely stranded.

Natural gas is a finite commodity and its price will always reflect that.  In contrast the price of renewables is more  dependent on technology costs which are rapidly falling.  For example, wind energy has decreased 30-40% in price since 2010, and the price of solar has fallen by 80%.

Finally, the report reminds us that the common good needs to direct which energy sources deserve public support.  That is a most useful reminder as the various political parties discuss whether and in what form a new Irish government may take shape.

Previous articleJohn Sweeney, “Looking Beyond Our Living Room Window” Next articleDefending Those Who Defend the Environment