Checking on your drafty window or door from space

When people consider the possibilities of technological advances to help counteract climate breakdown, they often look at the ”big picture.”  That includes such developments as carbon capture and storage (CCS), seeding clouds, sending sun-blocking particles into the air, and other geoengineering feats.

But sometimes overlooked are smaller, focused actions that affect targeted areas or certain populations or activities, but which also can be adopted for other critical needs of environmental protection.

Recent developments have made it possible to survey small areas, including neighborhoods, using satellites to detect emissions.  A notable use has been detecting methane leaks from gas pipelines, allowing regulators to take enforcement action against the leaks.

An interesting and imaginative variation under development is the use of satellites with thermal imaging to pinpoint heat loss from individual buildings.  A UK company is preparing to launch seven satellite probes that will undertake a worldwide survey measuring heat coming from buildings.  The infrared cameras are capable of measuring heat emission from any building on the planet, and can identify where the buildings are leaking energy and wasting power, whether from doors or windows.

The data can be sold to organisations, companies or governmental authorities for focusing resources on specific buildings that need energy efficiency measures.  Enhancing energy efficiency in residential and commercial buildings is an important, and underutilized, measure for reducing GHGs.

Further uses of the satellite probes may include monitoring river pollution from factories, status of solar panels, and monitoring wildfire outbreaks in open land.

There are other tech advances that provide novel ways of helping us deal with threats to our environment.  Here are a few.

If we want to preserve whales through marine protected areas, we need to know where they are.  Oceans are vast but one advantage is the distinctive singing of whales can travel hundreds of miles underwater.  The US National Oceanic and Atmospheric Association (NOAA) has used acoustic recorders for 14 years to monitor marine mammals at remote and hard-to-access islands, accumulating 190,000 hours of acoustic recordings.  Sorting through such a massive data set to manually identify whale vocalisations has always been overtaxing.  Working with Google AI for Social Good, NOAA used machine learning (ML) to identify whale vocalisations in the huge dataset and to map the presence of whales in the Hawaiian and Mariana islands.

Drones have become ubiquitous and here’s an interesting use.  Given the importance of trees to store GHGs, filter air, and nourish soil, the loss of 8.3 million acres of forest each year is not inconsequential.  Planting seeds by hand is possible but hardly able to keep up with the loss.  Now a UK-based company BioCarbon is using drones to spray tree seeds throughout ravaged forests.

Mapping drones first determine the best planting strategy for a region, then planting drones hover six feet above the ground and fire seeds so fast that they get snugly implanted into the soil.  It is claimed that 1 billion trees per year can be planted this way.  That’s a lot of potential carbon capture. 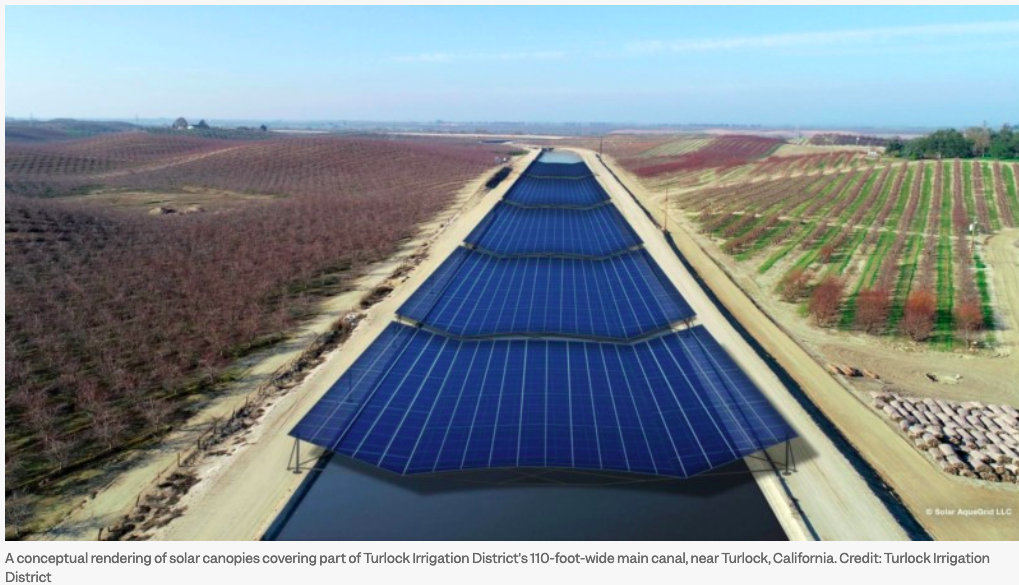 Certain technologies that have been around for a while, including solar panels and wind turbines, are getting increasingly more imaginative applications.  For instance, in drought-stricken California, a water district is building solar electricity-generating canopies over portions of the district’s canal system.  By shading the sun, the structures reduce evaporation, leaving more water for the district’s customers.  The mile-long project also could generate about 5MW of power.

In another instance, a team of researchers has determined that a wind farm the size of Greenland in the Atlantic Ocean could generate enough energy to power all of humanity, essentially eliminating the need for fossil fuels.

So while geoengineering can be daunting, and sometimes unproven as yet, there are few limits to imaginative uses of new technology.

Dan Gearino, “Inside Clean Energy: In Parched California, a Project Aims to Save Water and Produce Renewable Energy,” Inside Climate News (24 Feb 2022).  bit.ly/33TbEb4