Now the big meat and dairy companies are at it

Environmental protection efforts have been stalked for decades by the big money of fossil fuel interests.  These interests have spent not so small fortunes fostering denials of the realities of climate breakdown.  When the fossil fuel companies began to attack and undermine any climate action that threatened carbon products, they adopted the lobbying and public relations strategies of the tobacco industry in its long-standing fight against any regulation of cigarettes.

You have to wonder about adopting the strategies of big tobacco.  While their efforts succeeded for decades, more recently they have been widely exposed and cigarette smoking has been deeply curtailed and even vilified.  The work by Naomi Oreskes, and Erik Comway, in Merchants of Doubt, exposed the heavily funded and aggressive public relations and political campaign by the tobacco industry to undermine the science of and governmental efforts for regulating cigarette smoking.  Oreske has also done much the same for the oil industry.

Now we find a similar campaign being developed by “Big Meat and Dairy.”  A recent study from New York University, “The climate responsibilities of industrial meat and dairy producers,” concludes that:

Top U.S. meat and dairy companies, along with livestock and agricultural lobbying groups, have spent millions campaigning against climate action and sowing doubt about the links between animal agriculture and climate change…

It is the first peer-reviewed study that documents the individual carbon footprints of meat and dairy companies. Only four of the 35 companies had pledged to reach net-zero emissions by 2050; the others waffled to varying degrees.  Also, as is often found to be the case, especially in Ireland, the focus and commitments from the agri sector are on carbon dioxide (CO2) reductions whereas the primary emissions from the sector are of methane, a particularly potent though shorter lasting greenhouse gas (GHG). 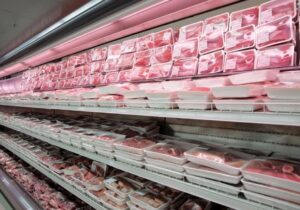 Generally, animal agriculture is responsible for about 14% of global GHGs, though in Ireland it is about 33%.  Interesting, because surprising, the study indicates that research has shown that the five largest livestock-based producers -— JBS, Tyson, Cargill, Dairy Farmers of America (DFA) and Fonterra — emitted more GHGs than ExxonMobil.  Despite this heavy loading of GHGs from agriculture, only 7 of 16 countries discuss animal agriculture as part of their plans to meet the Paris Accord.

Moreover, when the researchers analysed the companies’ future emissions compared to the emission reduction pledges of their home countries, they found that some companies’ emissions were higher than their respective home country’s total emission pledges.  This was true, for example, for Switzerland-based Nestlé and New Zealand-based dairy giant Fonterra.

In light of the major influence the agriculture sector has on GHG emissions and climate breakdown, it is disturbing to see the sector and individual companies denying climate breakdown and/or their role in the breakdown and opposing any climate regulation of the sector.  And they are not shy about spending money to fight climate regulations, including by public relations campaigns and through political candidates.

For example, in the U.S, the agribusiness spent $750 million on national political candidates from 2000 to 2020, close to the $1 billion spent by the energy sector.  For lobbying, the agri sector spent $2.5 billion from 2000 to 2019, compared to the $6.2 billion by energy and natural resource companies.  In comparing individual companies, Exxon spent substantial more dollars on campaigns and lobbying, but relative to each company’s revenues, Tyson spent double what Exxon spent on campaigns and 33% more on lobbying.

As with the fossil fuel interests, the meat and dairy industries also fund their own academic experts, who then publish research that minimizes or denies the adverse impacts of agriculture on climate breakdown.

The authors of the study note that there has been substantial research on fossil fuels industry’s efforts to influence public discourse but little on the agricultural industries’ similar campaigns.

This last note is especially relevant to Ireland.  In contrast to the US, there is little in the way of a fossil fuel industry and so little political influence from fossil fuel interests in Ireland.  But the agriculture and food sector exercise significant influence over socio-political affairs.  In particular they continue to push hard for an expansion of the sector despite its contributing about a third of Ireland’s GHG emissions.

What we need in Ireland is an independent and thorough assessment and evaluation of how the agri-food sector is trying to influence public perception and political action, or inaction, on climate breakdown.