They can harm and kill, and for no good reason.

We have all been trying to live through and understand some big moments  lately — Brexit, coronavirus, Black Lives Matter, BoJo-ism and Trump-ism.  And the general election in Ireland in February has only in the past few days resulted in the formation of a government.  Its Programme of Government has adopted a firm target of a 7% reduction in total greenhouse gas (GHG) emissions across the entire spectrum of economic sectors.  That is a big demand.

In the midst of these big moments, an initiative to stop idling of any vehicle is in danger of being overlooked.  It should not get lost.

Recently IrishEVs.com, a consumer awareness website that aims to fight the common myths surrounding electric cars and to promote their crucial role in reducing our carbon footprint, has launched a petition to pressure the Irish government to introduce anti-idling laws as part of the fight against climate crisis.  There is little in the way of details about what such legislation might entail, but we have plenty of models on which to build such controls, in the EU and US.

While driving combustion-engine vehicles, of all sorts, is a significant contributor to greenhouse gas (GHG) emissions, just sitting stationery in the vehicle and letting the engine run, or idling, can be just as harmful.  As Irish EVs note in their Press Release for the Petition, “The introduction of such laws and awareness campaigns could result in an annual saving of 40 tonnes of air pollution from Ireland’s 10,000-strong bus fleet alone. Meanwhile, if the average driver avoided idling for just 3 minutes every day of the year, CO2 emissions would be reduced by 1.4 million tonnes annually – the equivalent of taking 320,000 cars off the road.” 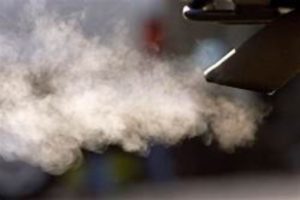 In framing any anti-idling legislation, there are several key implications that we have learned from other such programs.

An advantage for measures to control idling is that they can be focused on hot spots of pollution near vulnerable populations, e.g., schools, hospitals and care facilities.  Picking students up at school often leads many parents or caretakers to sit idling their vehicles while waiting for their riders, and that concentrates polluting emissions.  Those emissions are compounded by a fleet of school buses that idle while waiting to load students.  Dropping students off at school most often involves less idling, but of course any regulation should apply to any idling near the schools, as well as hospitals or care facilities.

Construction sites are another location where idling is prevalent and dangerous.  One element of an effective idling enforcement campaign is to include a provision that when the owner of a site has control over deliveries and movement of trucks at construction sites, that owner becomes financially and criminally responsible for any idling of any truck on or adjacent to the site.

A disadvantage of anti-idling actions is that they involve change of behavior, never an easy task. But demanding that people pick up their dog’s poop off sidewalks was also a big change, and yet it has worked by and large, through some enforcement and largely from peer pressure.  Seeing many others scooping up poop does put pressure on other dog lovers, especially in urban areas.  Hopefully the same result would follow wide publicity and initial enforcement for idling laws. 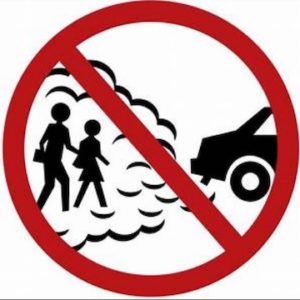 One of the real challenges is how to enforce idling laws or regulations.  Typically, the law bans idling of vehicles in excess of three to five minutes.  So some enforcement officer has to observe the idling for a short time before enforcing the law, usually with a summons or traffic-like ticket. That takes time and justifies limiting idling to three minutes.

Local authorities are well positioned for enforcement of anti-idling laws since they typically have other responsibilities for traffic and parking, and idling is closely related.   Such traffic officers can easily add idling to their assigned areas of responsibility.  It does not take significant retraining or resources, and idling can be observed while parking tickets are being written.

At the same time state, regional or national governments can participate in this pollution-prevention initiative by prescribing the terms of idling behavior:  which vehicles are covered, which places are affected, and for what length of time is idling permitted and banned.  This adds an important level of consistency between local areas for the idling behavior required.

Idling wastes fuel and money, and controlling it brings health and environmental benefits without costs.  At the same time, local authorities can generate income from idling fines, as they do from parking fines, helping to offset any regulatory costs.

For a description of the idling laws applicable in New York City and New York State (as of 2017) see, below, Stop Idling Vehicles: Report Public Health England.

Stop Smoking Diesel Trucks in ieBLOG section of www.irishenvironment.com (1 May 2017).  See details for an enforcement initiative to fine diesel trucks emitting pollutants beyond limits set by state law, and with a component of enforcement against idling trucks at the same time.  The author of this ieBLOG post was actively involved in creating and arranging the enforcement of this initiative when he was an Assistant Attorney General for the New York State Department of Law.

Previous articleA broad and deep climate action plan that is not centered on carbon pricing? Next articleThere has been a call for wildlife crime busters in the Gardaí