Several members of the Social Democrats have proposed that the new government in Ireland establish a specialised Gardaí unit to deal with wildlife crime and to “properly resource” the National Parks and Wildlife Service, presumably to work with such a unit.  There are no details on how such an arrangement would be structured or implemented, nevertheless, we can work off of it and suggest some issues that need to be addressed in any movement to expand prosecution of environmental crimes.  Another way of dealing with criminal enforcement of environmental laws would be through a police force within the Irish EPA.

Some of the existing environmental laws in Ireland provide for criminal sanctions, including fines and imprisonment, so there is an existing substantive legal structure for criminal enforcement.  But if there is a movement to strengthen any criminal enforcement, there should be an assessment of what additional behaviors or violations should be subject to criminal sanctions.  A challenging, and interesting, issue would be how to criminalize actions that adversely affect climate change.

Another interesting issue is the implications of the EU Directive on the protection of the environment through criminal law (2008).  Article 3 lists conduct that “constitutes a criminal offence, when unlawful and committed intentionally or with at least serious negligence.”  The conduct covers a variety of activities, including handling of waste or radiation materials, destroying wildlife or certain habitats.  In addition, breach of a host of environmental Directives listed in the Annexes are covered.   Article 4 requires that “inciting, aiding and abetting the intentional conduct referred to in Article 3 is punishable as a criminal offence.”  Article 5 provides that “Member States shall take the necessary measures to ensure that the offences referred to in Articles 3 and 4 are punishable by effective, proportionate and dissuasive criminal penalties.”

In light of its acknowledged status as a laggard when it comes to climate change action, Ireland may have trouble satisfying many of the requirements of the EU Directive.  If environmental criminal enforcement is to be strengthened, litigation over Ireland’s compliance with the Directive may be necessary.

One of the problems of creating a special unit within the Garda  Siochana, or Gardaí, Ireland’s police force, to enforce crimes against wildlife is that it may be viewed as a second tier force.  For example, in the New York Police Department (NYPD) officers in the Traffic Division who issue parking tickets are often seen from within as belonging to a status lower than NYPD “cops.”  Moreover, if selection for this special unit comes from within the Gardaí, it can end up with officers who have little commitment to environmental problems.  It seems that one of the advantages of the independent Irish EPA is that staff are selected by the EPA and are not merely assigned to work there from other agencies.

Instead of folding such enforcement into the Gardaí, we would suggest that there are more benefits to the establishment of a police unit within the Irish EPA.  Besides making use of an independent hiring process, there are other advantages.

Prosecution of environmental crimes by officers requires specialized scientific and technical knowledge and the EPA is the institution with that knowledge and expertise.  These EPA experts can help guide investigations, based on science and facts, and can serve as expert witnesses in any prosecution. 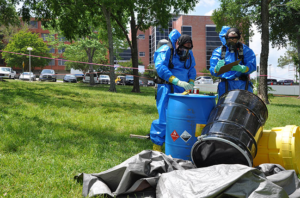 Working closely with the experts within EPA on a day-to-day basis would provide a critical resource for enforcement officers.  Such a relationship would also be very useful for the EPA experts.  Most of those experts have been trained in science disciplines and they likely find the world of criminal enforcement with cops, lawyers and judges a strange place.  Getting to know the enforcement officers on a daily basis makes that other world a more familiar and comfortable space to work in.

Another advantage to relying on the Irish EPA for environmental crime enforcement is that EPA already does it, to some extent.  The Office of Environmental Enforcement  (OEE) in EPA has the authority to take direct legal action against those who violate environmental laws, including inspecting facilities, taking samples, filing legal actions that include fines and potential criminal punishment.  The OEE also has a major responsibility for supervising the environmental protection activities of local authorities.

The study suggests that such a low level of enforcement action may result, at least in part, from the fact that Ireland’s economy is largely service-based and its industrial sector consists of relatively small firms where one might expect fewer significant pollution events.  On the other hand, smaller operators often are less careful in their environmental practices.

EPA’s OEE was found to rely on prevention, through national and regional planning and compliance workshops, seminars and conferences rather than punishment for enforcement purposes.  More carrots than sticks.

The suggestion for eco cops to prosecute wildlife is interesting and it should generate a wide discussion within the environmental community.   For the reasons discussed above, we suggest that the discussion should certainly start with an assessment of the existing enforcement program within the Irish EPA.

For an example of an enforcement initiative using a police unit dedicated to environmental violations, see STOP SMOKING DIESEL TRUCKS in the ieBLOG section of this magazine (May 2017).  It describes an environmental enforcement initiative that made use of DEC conservation officers to lessen the adverse impacts from diesel exhausts on people in communities of color or low income.
Sources:

DIRECTIVE 2008/99/EC OF THE EUROPEAN PARLIAMENT AND OF THE COUNCIL of 19 November 2008 on the protection of the environment through criminal law bit.ly/2P6gI0D

A&L Goodbody, A Guide to Environmental Law in Ireland bit.ly/3jWh08A

Previous articleIdling engines make the devil’s work Next articleExhausted from reading or hearing about coronavirus, BoJo and Trump