Deja Vu All Over Again

Yogi Berra, the 15-year All Star catcher for the New York Yankees, was noted for his loose use of language.  Some memorable phrases are:  “It ain’t over ’til it’s over.” “You can observe a lot by watching.”  And: “It’s deja vu all over again.”  Of course déjà vu means, literally, ‘already seen.’

With regard to the recent Climate Action bill introduced by the new coalition government in Ireland, Berra’s phrasing is right on target.  As John Sweeney, the leading Irish and international climatologist, noted recently: “I’m looking at this new bill with a sense of deja-vu because it contains a lot of the weaknesses of the previous bill.”  Irish Independent, below.

Before we explore one of those familiar weaknesses, it can be acknowledged that this 2020 bill offers some significant improvements over the existing Climate Action and Low Carbon Development Act (2015).  Instead of taking one step backward to go two steps forward, unfortunately the government is taking one step forward to allow it to go two steps backward.

The forward step is that the 2020 bill relies on a specific target of net zero, or carbon neutral, emissions by 2050, while the 2015 act has no specific target but only a commitment to “pursue and achieve” a sustainable, low-carbon economy by 2050.  And the 2020 bill provides for 5-year carbon budgets as a mechanism to reach the target, while the 2015 act relied on illusive “roadmaps” for finding its way.  There are other advances, like an expanded, though still suspect Climate Action council.

The serious weaknesses in the bill have been examined in thoughtful detail by the environmental NGO, Stop Climate Chaos, in a briefing document and through a Webinar featuring John Sweeney and the noted environmental lawyer Andrew Jackson of University College Dublin.

Sweeney points out a number of “ weasel words” in the bill, including the over reliance on all the things that “may” (but then do not necessarily “have to”) be done. 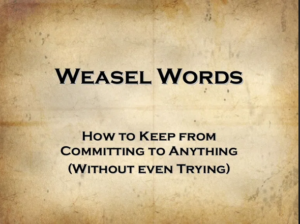 We want to focus on a particular phrase that was troubling in 2013 when the first climate act was under development.  It is relied on in the current 2015 Climate Act and resurfaces in the 2020 bill, where it is used 11 times by Sweeney’s count.  The phrase is “have regard to.”   For example, the bill provides that: “A Minister of the Government shall, in the performance of his or her functions, have regard to a carbon budget that has effect under subsection (7) or (11), as the case may be.”  At Section 6B, Approval of Carbon Budget, page 24.

In a video interview with Sweeney in the Podcast section of the April 1, 2013 issue of this magazine, we talked about the usage of the phrase, “Have regard to.”  This conversation and issue was explored further in the Reports section of the same issue in Agriculture Dictates Ireland’s Climate Policy:  The Government’s Climate Bill and the National Economic & Social Council Report, where the following analysis arguably remains relevant:

While Explanatory Notes are added to the text of the [2015] Bill, they do not add much to explain the government’s rationale for  the approach taken in the Bill.  As an example, to “explain” Head 4, the critical section of the Bill, it is noted that Ministers will “consider and have regard to” the ultimate objective of the UN Framework Convention on Climate Change (UNFCCC) and any other commitment under EU or international laws and then the Note quotes Article 2 of the UNFCCC. The explanation for the core of the Bill is simply a restatement of the 1992 UNFCCC, almost as if nothing has advanced since then, at least for this government.

Furthermore, the phrase “having regard to,” used frequently in the Bill, has an unfortunate history in Irish case law.  In the Podcast video interview with John Sweeney in the April issue of irish environment, he refers to a High Court case that provided legal interpretation of the phrase “have regard to,” which phrase is used frequently in the Climate Bill.  As Sweeney explains, the phrase means basically that the Ministers have to read the documents but are not bound by these other considerations in developing their climate plans.

Relying on this term does seem to send a message that any commitment under the Bill is indeed permissive and Ministers need not worry about actually complying with any other considerations in developing their plans.

Using such weasel words to avoid concrete commitments suggests the Irish government, of whatever composition, has learned nothing in the intervening period since 2015, despite the critical action plans detailed by the environmental NGOs, the Citizens’ Assembly, the Climate Change Advisory Council, and the Joint Oireachtas Committee on Climate Action.

Interview with John Sweeney on the Irish Climate Bill and National Economic & Social Council report on climate policy
in Podcast section of irish environment magazine (April 1, 2013) at bit.ly/37QCKiK   See at 14:45 of interview.