Over the past decade climate denialism has seemed to fade.  Increasingly those who want to belittle climate breakdown can no longer rely on claims that it just does not exist.  The overwhelming scientific consensus is that the breakdown does exist, it is based in large part on humans using fossil fuels and other greenhouse gases, and it is getting worse already.   The explosion of extreme weather events across the globe, tied to climate breakdown, has sealed the fate of traditional climate denialism.

But there are still plenty of people, with lots of money, who oppose doing anything about climate breakdown, often for personal financial reasons, e.g., their economic livelihood requires continuing reliance on fossil fuels and other GHGs.  They may have abandoned old arguments but they have not given up.  Rather they have merely shifted tactics and we need to be alert.

Opponents of climate action have increasingly turned one of our own arguments against us, with disturbing implications. 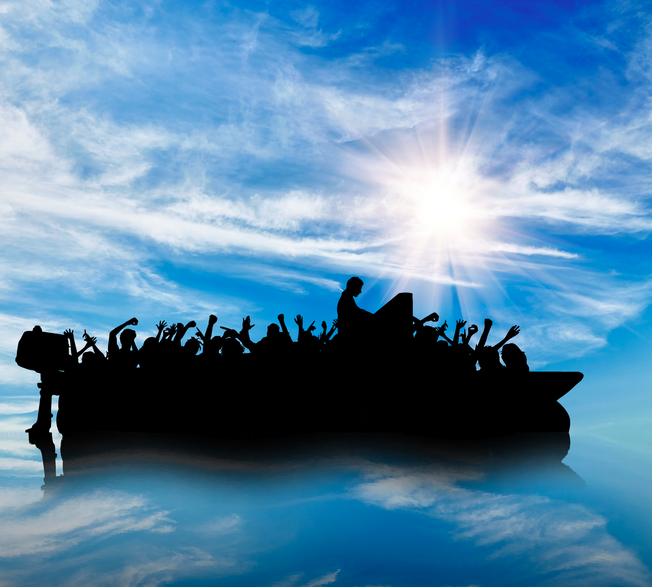 We have often argued that if nothing is done to control and eliminate GHGs, we will see massive waves of environmental refugees fleeing places being destroyed by floods, fires, famine, and droughts.   There may be as many as 1.2 billion such refuges by 2050.  Our conclusion has been that such waves need to be prevented by controlling or eliminating GHG emissions.

With a degree of perversity, those opposed to climate actions conclude that the problem is the wave, not the cause of the wave. They argue that “these people” riding the waves are immigrants who will bring their dirty ways, their pollutants, and carbon dioxide and GHGs with them (reflecting Trump on immigration).  So the solution is to stop these generally poor and disadvantaged people from coming to where we are, with walls and borders and repressive immigration policies, instead of stopping climate breakdown.  Stopping immigration becomes an environmental/green project!

The core of this anti-immigrant argument feeds off the nationalism that runs rampant across the globe at the moment: More walls, more borders, more exclusion (see Milman).

Of course the idea that the people in these waves are a major source of climate breakdown is belied by the reality that the richest 1% of the world are responsible for more than twice as much carbon dioxide as the poorer half of the world from 1990 to 2015.

We need to continue to be advocates for those ”fleeing climate-induced disasters” but we need to be sensitive to how our argument is being turned against the vulnerable people sucked up into these waves.

“Eco-Fascism: The dark side of environmentalism” in ieBLOG section of www.irishenvironment.com (1 Sept 2019).

Previous articleThe Writing on the Climate Wall Next articleNatural gas as a “transitional” fuel?