At long last, the revised Climate Bill was finally published this week.

We’ve been following it since its original release back in October 2020, and kept our eye on it all the way through its pre-legislative scrutiny.

In December, the Joint Oireachtas Committee on Climate Action issued over 70 recommendations to the Bill, and we covered that, too.

So – where does this revised Bill leave us? What’s changed? What comes next?

Bring me back up to speed here – what exactly is the Climate Bill?

Its official title is the “Climate Action and Low Carbon Development (Amendment) Bill 2021” and it’s the framework for how Ireland will reduce its emissions over the coming three decades. It’s a series of amendments to the statutory Climate Act of 2015.

It maps out how five-year carbon budgets will be set for the economy, it commits to annual revising the Climate Action Plan from 2021 onwards and promises to strengthen the role of the Climate Change Advisory Council, who advised the Government on these aforementioned carbon budgets.

Upon its initial publication back in October, the Department of Climate Action said that the document “reflects and remains faithful” to the recommendations of the Citizens’ Assembly and the Joint Oireachtas Committee on Climate Action report published in 2019, both of which call for quicker and more meaningful action on the climate crisis.

Alright: we had an initial Bill, it underwent scrutiny, and then recommendations were issued to improve it. So what’s different/what’s stayed the same?

One of the first big changes is the wording of the National Transition Objective, which is essentially what Ireland is aiming to become through the implementation of this Bill.

The exact wording here is that the State shall “pursue and achieve, by no later than the end of the year 2050, the transition to a climate resilient, biodiversity rich, environmentally sustainable, and climate neutral economy”.

The original draft of the Bill merely said the State must “pursue” the objective. There was no language compelling them to actually reach the outcome.

We’ve also got the addition of biodiversity in the objective, which means the State has now bound itself legally to guaranteeing a “biodiversity-rich” Ireland by mid-century.

We’ve also got the first two carbon budgets (so the next ten years, as each budget spans over a five year time period) slated to deliver on a 51 per cent emissions reduction compared to 2018 levels.

(If that reduction figure sounds familiar to you, that’s because it was a Programme for Government commitment).

The 2050 target is legally binding, however there seems to be a different story when it comes to the end-of-this-decade target.

The Climate Change Advisory Council will “propose” two budgets that will allow for this halving of emissions. However, the Government can pivot away from the Council’s recommendation and provide an explanation.

According to Dr Diarmuid Torney, such a deviation would require the Government to ignore both the Climate Change Advisory Council advice and its own stated intention in the Programme for Government which in his opinion, “seems utterly implausible”.

It’s also important to note that climate neutrality by 2050 is a goal set by the European Union. However, many argue that it needs to be reached much sooner in order to limit warming to 1.5 C.

Campaigners also expressed concern and feared that agriculture in the revised Bill, our largest emitting sector, would get its own separate target for emissions reduction, thus sidelining its contribution to reducing emissions.

The Programme for Government had stated that agriculture has a “special economic and social role” and that its “distinct characteristics of biogenic methane” would be fully recognised in 7 per cent annual emission reductions from 2021 to 2030.

Yet in the end, agriculture’s emissions will fall under the remit of national carbon budgets according to the newest version of the Bill. However, it is “up to Government” to decide on the trajectories for different sectors, according to the Department of Climate Action.

Where does it fall short?

The October version of the Bill did not mention the terms “Just Transition” or “climate justice”, and while the revised version does, critics stress it falls well short of what is needed.

Ensuring a Just Transition is something for the Minister to “have regard to”, not to be consistent with. It is also to be applied “insofar as is practicable” in order to maximise employment opportunities and support communities that may be negatively impacted by the transition.

When it comes to climate justice, the Bill “lacks the ambition needed” to address wider issues of inequality, according to the Community Law & Mediation Centre (CLM).

The centre recently launched a new Centre for Environmental Justice and welcomed the inclusion of the aforementioned terms, but said it did not go far enough.

“From our perspective, climate justice is about intersectional responses to the climate crisis, looking at other issues such as transport, clean air, and housing standards/energy costs when taking action on climate,” CEO of CLM Rose Wall said.

“This was the approach taken by the Scottish parliament when defining the ‘climate justice principle’ in the Climate Change (Scotland) Act 2009 and which we recommended in our submission on the Bill,” she added.

The 2009 Scottish Act explicitly defines climate justice as taking action to reduce warming and to adapt to the effects of climate change in ways that support the people who are most affected by the climate crisis, but who have done the least to cause it. Their principle also outlines climate action as being intrinsically linked to addressing inequality.

Another area the Bill failed to address is a longstanding climate issue here in Ireland: the importation of liquified natural gas (LNG).

While Ireland itself has banned fracking on its own soil, it still has not legislated to halt the importation of fracked gas.

The planet-warming gas is extracted through injecting sand, pressurised water and various chemicals into shale rock and forcing gas out of the ground.

Numerous studies have linked it to health issues, earth tremors, and large carbon and methane emissions.

The previous Government referred to gas as a “transition fuel”, however a 2019 report from Oil Change International referred to its production and use as a “bridge to climate disaster”.

The Joint Oireachtas Committee on Climate Action had recommended that its importation be banned through the Bill, however, it was not taken on board.

Minister for Climate Action Eamon Ryan said the matter would be dealt with separately outside the Bill while Sinn Fein Senator for climate justice Lynn Boylan called the omission a “massive missed opportunity”.

The Bill is now set to progress through the Oireachtas as priority legislation, so we’ll be following it with hawk-eyes to see how it goes.

The revised Climate Bill must be amended if it is to deliver on the Programme for Government’s commitments, a letter from experts to party leaders has warned.

Andrew Jackson of the Sutherland School of Law at UCD, Barry McMullin at the Faculty of Engineering and Computing at DCU, and John Sweeney, an Intergovernmental Panel on Climate Change (IPCC) scientist welcomed positive changes in the revised Bill, but stressed that it must be amended if it is to meet the Government’s end-of-decade climate targets.

The Programme for Government committed to an average 7 per cent per annum reduction in greenhouse gas emissions from 2021 to 2030, resulting in a 51 per cent reduction over the decade.

However, the language in the Bill, and in particular the inclusion of a new subsection 6A(5), is “fundamentally flawed, being at once uncertain in law and mistaken in science”, according to the letter.

The text of the Bill is legally unclear and could allow for multiple conflicting interpretations, which is “just bad law-making and needs to be fixed in itself,” according to the expert authors.

Otherwise, they add, there would be a real risk of litigation seeking to overturn the Climate Change Advisory Council’s first carbon budget proposals.

By failing to specify the language, the experts put forward one interpretation whereby the Climate Change Advisory Council might lawfully propose a budget for the next ten years that amount to less than the 7 per cent figure as outlined in the Programme for Government.

The authors warn that necessary annual emissions targets could then be obscured by a “fig leaf claim” that a 51 per cent target could still be met through a staggering drop in 2029.

Such a precipitous decline would be “in practice unachievable”, they conclude.

The aforementioned precipitious drop is represented above in the blue line source: Andrew Jackson, Barry McMullin and John Sweeney

If this is what the Bill is working towards, it represents a “clear departure from the Programme for Government’s 2030 commitment,” according to their analysis.

They also note that from a legal and scientific view the subsection is easily fixed by the wording the authors have put forward, however, they say, “the question is whether there is the political desire to fix it.”

During the pre-legislative scrutiny of the Climate Bill, experts repeatedly emphasized the need for interim targets, like the 2030 one, in order to ensure ongoing accountability on climate.

Dr. Aine Ryall of University College Cork told the Joint Oireachtas Committee on Climate Action that including interim targets is “absolutely vital” and Independent Senator Alice-Mary Higgins noted that the absence of one seemed to be “legislatively inconsistent” with previous climate agreements Ireland had made.

The revised Bill was published  late March and is now set to progress to the Dail for debate in the coming weeks.

Both articles were originally published in greennews.ie/  Supported by the Irish Environmental Network (IEN) 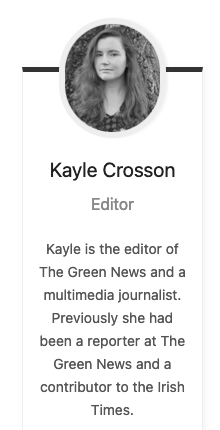