What Does the Road Ahead Look Like for Electric Cars? Well posted

The transport sector accounts for the largest share of carbon dioxide (CO2) emissions in the EU, and generally elsewhere.  In the EU, transport constitutes about 28% of CO2 emissions (21% if international aviation and shipping are excluded), and it is the only sector with an increase in emissions since 1990.  Within the sector, cars are the biggest contributor of CO2 emissions, with 43% of total sector emissions and an increase of 18% since 1990.  In contrast, railways account for 0.48% of transport emissions.

The increase in car emissions comes mainly from an increase in passenger kilometers travelled and vehicle inefficiency.  A major focus for addressing these emissions has been on lowering the CO₂ emissions of new cars and driving the shift to zero (tailpipe) emissions through CO₂ regulation of new cars. There are other means of reducing reliance on cars, including lower private car ownership, public transport, walking and cycling.  But here we will focus on a recent report from Transport & Environment, Mission (almost) accomplished! Carmakers’ race to meet the 2020/21 CO2 targets, and the EU electric cars market.

Such regulation is the primary means of decarbonising road transport emissions by 2050, a necessary step to meet the Paris Agreement goals.  In addition, such actions can help reduce health risks associated with emissions of nitrogen oxide and particulate matter.

The current European 2020/21 CO₂ emissions regulation for passenger car manufacturers was confirmed in 2014. The regulation sets an effective target of 95 gCO₂/km for 2020 and 2021.  Car manufacturers have to comply with the regulations on average over the full calendar year. The regulation applies to all countries of the European Economic Area (EEA), which includes the 27 member states of the European Union, plus Iceland, Liechtenstein, Norway, and the United Kingdom (in 2020 only) and covers new passenger car registrations of category M1.

Besides this basic regulatory requirement, there are a number of key “regulation flexibilities” that provide ways for manufacturers to meet the CO2 emission requirement besides reducing the gCO₂/km.  Those flexibilities include:

– 95% phase-in: only for 2020, 95% of cars sold count for the regulatory targets, providing  a bit of a cushion to comply in the first year of the new regs.  In effect manufacturers can eliminate the highest emitting cars in 2020

– Pooling: car makers can form pools to comply jointly with the regs, which allows those who do not sell electric cars, or few, to align with those who have a heavy presence in the eCar sector.

– Mass-based target: individual manufacturer targets are adjusted by the average mass of the manufacturer’s fleet. The heavier the fleet, the higher the CO2 emissions target, and vice versa (lighter fleets have lower targets).

– Eco-innovations: car makers can get credits, to a maximum of 7 gCO2/km, for adding technology (e.g., LED headlamps) that reduce emissions on the road but not during tests for compliance purposes.

– Derogations for certain carmakers: manufacturers producing a small volume of vehicles are treated differently. Those selling between 10,000 and 300,000 cars get a 45% reduction in targets; those selling less than 10,000 cars effectively set their own targets, while carmakers that sell less than 1,000 cars are fully exempt.

Some manufacturers have achieved a significant portion of their compliance through reliance on the flexibilities.

With the European 2020/21 CO₂ emissions regulation, sales of electric cars (eCars) have become critical and the T&E report focuses on the status of that part of the car sector.

As sales have risen, CO₂ emissions have fallen.  In January 2020, the emissions of new cars dropped after years of increasing SUV sales and emissions. “From the levels of over 122g/km in 2019, the H1 2020 new car CO₂ emissions dropped to 111 g/km , the largest drop since the standards came into effect in 2008.”  At 3.  As a result, some of the carmakers have already reached their 2020 CO₂ emission requirements and others are very close. [graph] 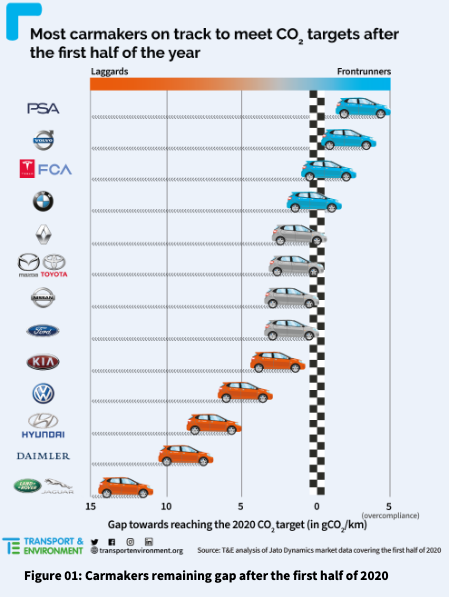 Looking beyond 2021, the picture is a bit hazy.  Emission savings from sales of eCars continue to be offset to some extent by the “lucrative but polluting SUV addiction.”  At 7.  Moreover, half of all plug-in sales are for “fake electric” plug-in hybrids that are often not charged and that emit 2-4 times more CO₂ emissions in the real world than in the lab tests.

Technology advances are pushing eCar sales and emission reductions, and early compliance with the 2020/21 targets, so that the current 2025 and 2030 CO₂ targets are already inadequate.  More ambitious car targets should drive market growth for eCars.  As the report notes, Norway shows how fast the market can grow, as it went from 6% sales in 2013 to almost 50% in 2018.  The report concludes that electric cars are expected to reach price parity with diesels and petrols after 2022.  As a result, “The revised CO₂ standards should therefore set more ambitious annual targets from 2025 onwards to achieve 100% zero emission sales in 2035 ,” and to drive us into a new “Emobility Era.”  At 9.

Further evidence across the Atlantic supports an optimistic view for the future of eCArs.  A short note in the most recent  “Sunday Business” section of The New York Times headlines “General Motors Sees the Future,” and points out that “General Motors, the largest car manufacturer in the United States, abruptly dropped its support for President Trump’s crusade to strip California of the power to set stricter fuel economy standards than the rest of the country.  The automaker announced that it would dedicate itself to electric vehicles and other green energy initiatives championed by Mr. Biden.” Of course the announcement is a bit of political opportunism but it also reflects the tide shifting further towards eCars, and we know tides are being affected by climate change.

Previous articleLet’s Not Forget Pollution Next articleCovid, Climate and Health: The Lancet Countdown